How damned dumb must you be – to be a Republican President of the GOUSA?

But as her health insurance premiums continued to rise, reaching a price higher than her mortgage, she decided to vote for Trump with the hope that he would repeal and replace Obamacare. She wasn’t alone: Health care was one of the top reasons that voters chose Trump in the 2016 election. A Pew study shows the issue was one of the five most important issues for Americans. Many Trump voters expressed frustration with high premiums and the penalty tax of Obamacare. And “repeal and replace,” repeated for years by Republican Congress members, became one of Trump’s signature campaign promises.

❝ But by the time Inauguration Day rolled around, Underwood already regretted her choice. She told Vox that in January she was already seeing signs that Trump wasn’t going to stay true to his campaign promises.

And she recently saw her fears come true: The American Health Care Act, Republicans’ repeal-and-replace plan — the very issue that had decided her vote — failed…

❝ Repeal and replace was the primary motivating factor in my vote for Donald Trump. It is what swayed my vote despite my misgivings with him. The premiums had continued to climb under Obamacare. It was really squeezing our household budget, and I was still unable to buy the medications I needed. I didn’t receive much coverage under my policy, and I felt like I was being held hostage to this policy that wasn’t beneficial to me unless I needed it for some catastrophic event…

I wanted Trump to do away with the tax penalty mandate if you didn’t get coverage. I wanted him to lower premiums and expand coverage under these plans.

❝ I didn’t really have strong, preconceived notions of how Washington would accomplish this. I’m not running for office, I’m not promising to make it better. I take them at their word to make it better. If that means more government spending to make that happen or more free market enterprise options, it is more or less irrelevant to me. I just wanted them to make it happen. They promised they would do it...

❝ …Be more open to regretters. I certainly understand…anger and frustration, but we need to work together going forward.

The crowd that recognizes the incompetence of the Democratic Party in the 2016 election – and thinks voters can only move forward by proselytizing Trump True Believers – is as naive as regretters once were. Sorry for the complexity; but, it works.

First, the folks who should be brought forward into progressive action are the liberals and independents who didn’t vote. For whatever reason. Positive progressive change is what we should be fighting for. Not providing free counseling for folks who still believe Trump’s populist bullshit.

Second, this is the first time I’ve bumped into the term, “regretter”. In this case – and likely most others – we’re looking at someone who tried to take Trump at his word. Foolish as that seems to cynical geezers like me, I can understand the confusion. The words often made some elemental sense – even if the source was a patent leather pathological liar. And “regretters” like the woman in this interview began to understand the whole disaster even before Inauguration Day.

Unlike her peers, she didn’t stop thinking about solutions. She hasn’t relied on uncritical acceptance of the bullshit of someone who played an important person on so-called reality TV.

Welcome aboard, sister. We all have a long critical battle to fight. Together. 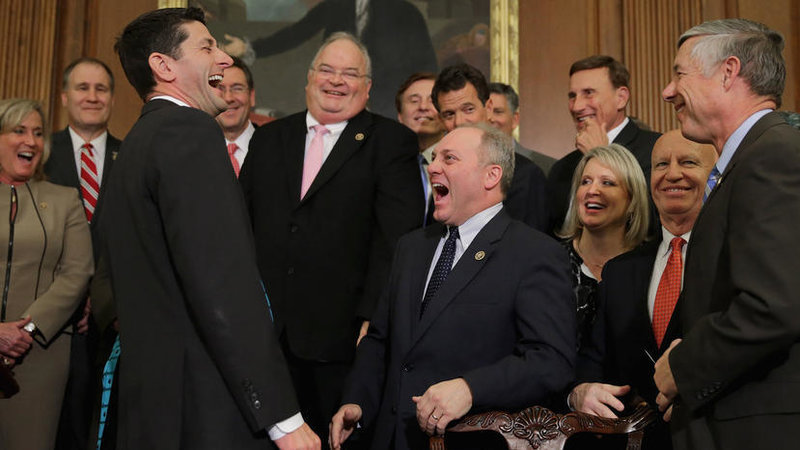 …Affordable health care is in decline as premiums and health costs increase at exponential rates. Some politicians cannot relate to the cost burden experienced by families across the nation because they’ve historically received health benefits that most Americans have not…

A lot of Members of Congress promote choice as an American value, which is all the more reason for them to have to continue to choose their own health coverage from the free marketplace. If private health care is good for the American citizen, it should also be good for the people that defend it.

If Congress is willing to drastically cut healthcare subsidies for most people, are they willing to have the same rules apply to them and their families?