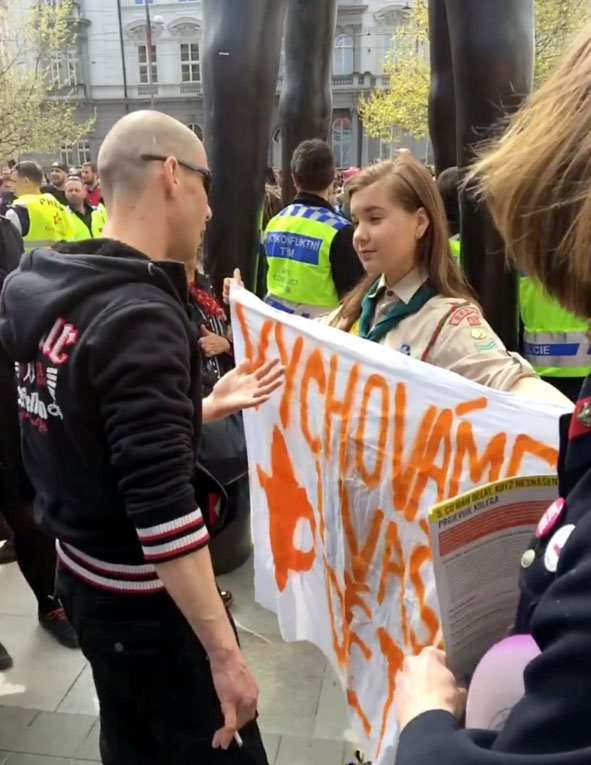 ❝ A 16-year-old girl Scout pictured standing up to a far-right skinhead has told the BBC she was not afraid of neo-Nazis and wanted more young people to stand up to fascism.

Lucie Myslikova, a film and animation student from the Czech city of Brno, was captured in her uniform confronting a shaven-headed demonstrator.

❝ “I wasn’t afraid,” Lucie told the BBC by telephone from her school…”I went to the counter-demonstration as someone who was determined to change things. To me it makes sense to try and change the world around me,” she went on.

“I think young people should get involved in such things. They should be aware of what’s going on.

“You ask me if standing up to skinheads should be left to older people – well us, younger people, are going to be living here a lot longer than the older generation.”

❝ Lucie explained the argument with the unnamed man had been over refugees and migrants. She said she had told him that countries had a duty to help those fleeing war and conflict, and that in such cases borders did not exist…

“The main thing that’s struck me is that some people are now calling me an ‘extremist’, that being anti-fascist is somehow ‘extremist’,” she told the BBC.

“That seems to me to be the height of absurdity.”

Not anymore absurd than the fake news and alternative facts from Trump and his trained chumps. They think that Americans who demonstrate for democracy and transparency must be paid to do so. They have no comprehension of people, young or old, who believe in science and progress over fear and superstition.

For the small-minded that may be true.