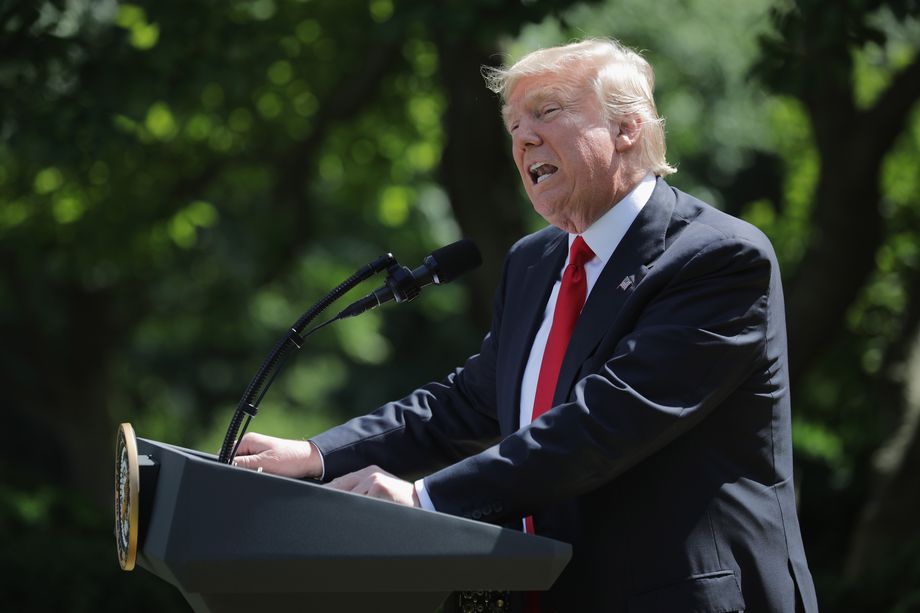 Not telling the truth about anything — Chip Somodevilla/Getty Images

❝ The other day, President Donald Trump gave a speech announcing that the US would withdraw from the Paris climate agreement.

It is a remarkable address, in its own way, in that virtually every passage contains something false or misleading. The sheer density of bullshit is almost admirable, from a performance art perspective. Trump even managed to get in some howlers that had nothing to do with climate change. He started by citing an act of terrorism in Manila that wasn’t terrorism. He said, “our tax bill is moving along in Congress,” but there’s no tax bill. And so forth.

A proper fact-check would run longer than the speech itself. To keep this quick, I’ve selected the top five deceptions.

❝ The author, David Roberts, says: I’m not calling these “lies,” because that implies Trump knows they are false. It is far from clear that Trump understands anything about any of the issues at stake, or is even capable of forming stable beliefs as such…

Anyway, whether he’s lying or merely bullshitting, here are the top five:

1) No, an agreement cannot be both nonbinding and draconian (Spoiler: Paris is the former)…

2) No, Paris cannot be “renegotiated”

3) No, abiding by the agreement will not cost the US a bazillion dollars

4) No, China and India are not getting away with anything

5) No, other nations are not laughing at us behind our backs — or they weren’t, anyway

❝ Here we come to the root of the matter: tribalism. The tribalist (or “nationalist” as they are often called) sees all relationships, including relationships among nations, as zero-sum contests. There are only strong and weak, dominator and dominated, winners and losers.

For the millionth time, a voluntary deal cannot hamstring anyone, nor can it empower anyone. But the tribalist brain simply cannot grok an arrangement of mutual long-term benefit. So it must be unsavory “foreign lobbyists” trying to get us “tied up and bound down” so that they can drain our precious bodily fluids.

RTFA, It makes good sense even when, as usual – Trump doesn’t. Roberts even takes the time to point out how and when he shifts from his 5th-grade vocabulary – as written for him to recite – into kindergarten-speak when something strikes a responsive chord in his lizard brain.