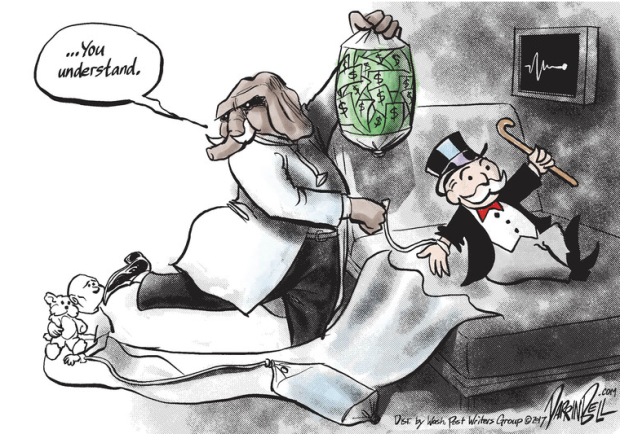 ❝ Everything happened so fast as I walked out of the doctor’s exam room. I was tucking in my shirt and wondering if I’d asked all my questions about my injured shoulder when one of the doctor’s assistants handed me two small boxes of pills.

“These will hold you over until your prescription arrives in the mail,” she said, pointing to the drug samples…

❝ …As an investigative reporter who has covered health care for more than a decade, the interaction was just the sort of thing to pique my interest. One thing I’ve learned is that almost nothing in medicine — especially brand-name drugs — is ever really a deal. When I got home, I looked up the drug: Vimovo.

❝ The drug has been controversial, to say the least. Vimovo was created using two readily and cheaply available generic, or over-the-counter, medicines: naproxen, also known by the brand Aleve, and esomeprazole magnesium, also known as Nexium. The Aleve handles your pain and the Nexium helps with the upset stomach that’s sometimes caused by the pain reliever. The key selling point of this new “convenience drug”? It’s easier to take one pill than two.

❝ Of course I also did the math. You can walk into your local drugstore and buy a month’s supply of Aleve and Nexium for about $40. For Vimovo, the pharmacy billed my insurance company $3,252. This doesn’t mean the drug company ultimately gets paid that much. The pharmaceutical world is rife with rebates and side deals — all designed to elbow ahead of the competition. But apparently the price of convenience comes at a steep mark-up…

❝ So if Vimovo is the Goober of drugs, then why have Americans been spending so much on it? My insurance company, smartly, rejected the pharmacy’s claim. But I knew Vimovo’s makers weren’t wooing doctors like mine for nothing. So I looked up the annual reports for the Ireland-based company, Horizon Pharma, which makes Vimovo. Since 2014, Vimovo’s net sales have been more than $455 million. That means a lot of insurers are paying way more than they should for their Goober.

And Vimovo wasn’t Horizon’s only such drug. It has brought in an additional $465 million in net sales from Duexis, a similar convenience drug that combines ibuprofen and famotidine, AKA Advil and Pepcid…

❝ “It’s a scam,” said Devon Herrick, a health care economist with the National Center for Policy Analysis. “It is just a way to gouge insurance companies or employer health care plans.”

RTFA for the marketing games Big Pharma plays with doctors and patients, insurance companies and health care plans. Capitalism is filled with creepy companies; but, I have to say – few are greedier than Pharmaceutical manufacturers.

To understand what’s happening, we need to get a little geeky and take you back to Stats class. The classic bell curve represents the distribution of all temperatures at a location. The bulk of temperatures — those close to average — sit near the middle of the curve. Record temperatures, which are rare, sit on the fringes, with hot on right and cold on the left. As the world warms from the increase in greenhouse gases, the whole curve shifts to the warmer side, the right. This shift results in a large jump in the number of extremely hot days and a drop in the number of extremely cool days. It also means heat records are more likely to be set than cold records. And it is these extremes that impact our lives.

❝ That’s what we are seeing across much of the country. Average summer temperature have risen a few degrees across the West and Southern Plains, leading to more days above 100°F in Austin, Dallas and El Paso all the way up to Oklahoma City, Salt Lake City, and Boise. It’s worth noting that this trend has been recorded across the entire Northern Hemisphere…

Science is a force for truth. Even for people who refuse to learn from examples as basic as this graphic. Or the research data behind it.