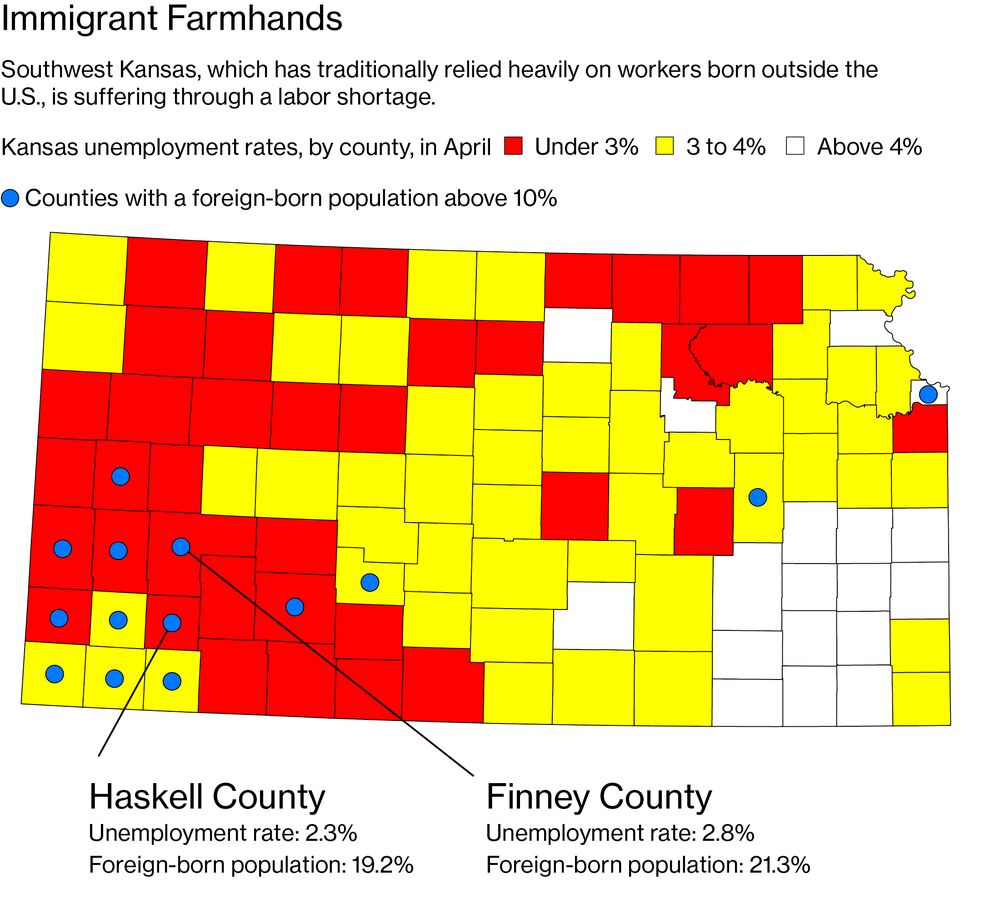 ❝ Undocumented immigrants make up about half the workforce in U.S. agriculture, according to various estimates. But that pool of labor is shrinking, which could spell trouble for farms, feedlots, dairies, and meatpacking plants—particularly in a state such as Kansas, where unemployment in many counties is barely half the already tight national rate. “Two weeks ago, my boss told me, ‘I need more Mexicans like you,’” says a 25-year-old immigrant employed at a farm in the southwest part of the state, who spoke on condition of anonymity because he’s trying to get his paperwork in order. “I said, ‘Well, they’re kind of hard to find.’”

❝ Arrests of suspected undocumented workers have jumped 38 percent since President Donald Trump signed a pair of executive orders targeting immigration in January…Michael Feltman, an immigration lawyer in Cimarron, Kan., says his firm has seen more people coming in with naturalization questions over the past six months than over the previous four years combined. “I’m really worried every little traffic ticket’s going to turn into detention,” he says.

Others feel the same way. “The threat of deportation and the potential loss of our workforce has been very terrifying for all of us businesses here,” says Trista Priest in Satanta, Kan. She’s the chief strategy officer at Cattle Empire, the country’s fifth-largest feed yard, whose workforce is about 86 percent Latino…

❝ The American Farm Bureau Federation…has proposed that, to “minimize the impact on current economic activity,” unauthorized agricultural workers already in the country should be granted permanent legal status once they prove they have worked in the industry for a set period of time. The AFBF has warned that an enforcement-only approach could slash industry output by as much as $60 billion annually.

Like any good litle proto-fascists, Trump and his followers believe the quickest and easiest means to solving any problem is someone carrying a gun and a badge.

❝ The Senate health-care bill is a blatantly cynical and political plan to reward the rich, squeeze the poor and give Republicans the chance to claim they protected the middle class — or at least those in the middle class who aren’t too sick.

❝ The Republican campaign to repeal Obamacare was always based on a false promise (okay, a lie): that it was possible for all Americans to have better, cheaper medical care without raising taxes or reducing the incomes of doctors and the profits of hospitals and drug companies.

The reality, as the Senate’s Republican caucus came to understand, is something quite different: You can’t lower health-care costs or extend coverage for some people without raising the taxes or premiums of everyone else. It’s a zero-sum game.

❝ Actually, that statement is not exactly true. In a country that spends roughly twice as much as other advanced countries for mediocre results, it would be possible to restructure the system to give most people more for less. But, alas, the Senate bill does almost nothing to restructure the way medical care is delivered, how much is consumed and how it is priced, because to do so would have meant taking on the business interests that the Republicans are counting on to finance their reelection.

Instead, what we get is a financial shell game.

RTFA. Lots of detail about the finances and financial requirements of managing a reasonable healthcare system for all. Even a suggestion on how Democrats might fight for this as a right – not a privilege as Republicans would have it.

Yes, there are beaucoup Dems who remember where they came from. They’re just not in charge. I have as little confidence in the Democrat Establishment nationally as I have contempt for the Republicans. I think they’ve been dining on the same gravy train for too many years.

Nope. It’s up the Progressive grassroots types who supported Bernie to figure out how to join with honest Liberals still stuck into the Democratic Party – to register voters, register the disaffected who’ve given up after decades of being ignored – and fightback against the Republican Party, the greediest bastards in our narrow political system and the fools who support them. ❝ In today’s polarized world, there aren’t many issues on which Democrats and Republicans agree. So when they do, we should seize the rare opportunity to move our country forward. One such issue is criminal-justice reform, and specifically the need for sentencing reform for drug offenses.

All across the political spectrum, in red states and blue states, from Sen. John Cornyn (R-Tex.) and the Koch brothers to Sen. Patrick Leahy (D-Vt.) and the American Civil Liberties Union, there is broad consensus that the “lock them all up and throw away the key” approach embodied in mandatory minimum drug sentences is counterproductive, negatively affecting our ability to assure the safety of our communities.

❝ But last month, Attorney General Jeff Sessions rolled back the clock to the 1980s, reinstating the harsh, indiscriminate use of mandatory minimum drug sentences imposed at the height of the crack epidemic. Sessions attempted to justify his directive in a Post op-ed last weekend, stoking fear by claiming that as a result of then-Attorney General Eric H. Holder Jr.’s Smart on Crime policy, the United States is gripped by a rising epidemic of violent crime that can only be cured by putting more drug offenders in jail for more time.

❝ That argument just isn’t supported by the facts. Not only are violent crime rates still at historic lows — nearly half of what they were when I became a federal prosecutor in 1989 — but there is also no evidence that the increase in violent crime some cities have experienced is the result of drug offenders not serving enough time in prison. In fact, a recent study by the bipartisan U.S. Sentencing Commission found that drug defendants with shorter sentences were actually slightly less likely to commit crimes when released than those sentenced under older, more severe penalties.

Contrary to Sessions’s assertions, Smart on Crime focused our limited federal resources on cases that had the greatest impact on our communities — the most dangerous defendants and most complex cases. As a result, prosecutors charged more defendants with murder, assault, gun crimes and robbery than ever before. And a greater percentage of drug prosecutions targeted kingpins and drug dealers with guns.

Not that the Confederacy, today’s Republican Party and power pimps like Trump care a whole boatload about evidence-based reason and decision-making.

RTFA for clarity, historic sense and analysis. You ain’t finding it in the White House.