From the LA Times:

Anthony Scaramucci, announced little more than a week ago as President Trump’s White House communications director, was ousted Monday before he was even officially sworn in. John Kelly, the newly appointed chief of staff, told Scaramucci he was going to be replaced around 9:30 a.m., according to a person close to the White House.

❝ Oh come on. The only way this gets better is if they bring back Sean Spicer and promote him into Scaramucci’s position.

Har! Trump is in the white House to provide entertainment for otherwise hopeless old white guys. He ain’t bad at it. Though it doesn’t require a whole boatload of talent, either. 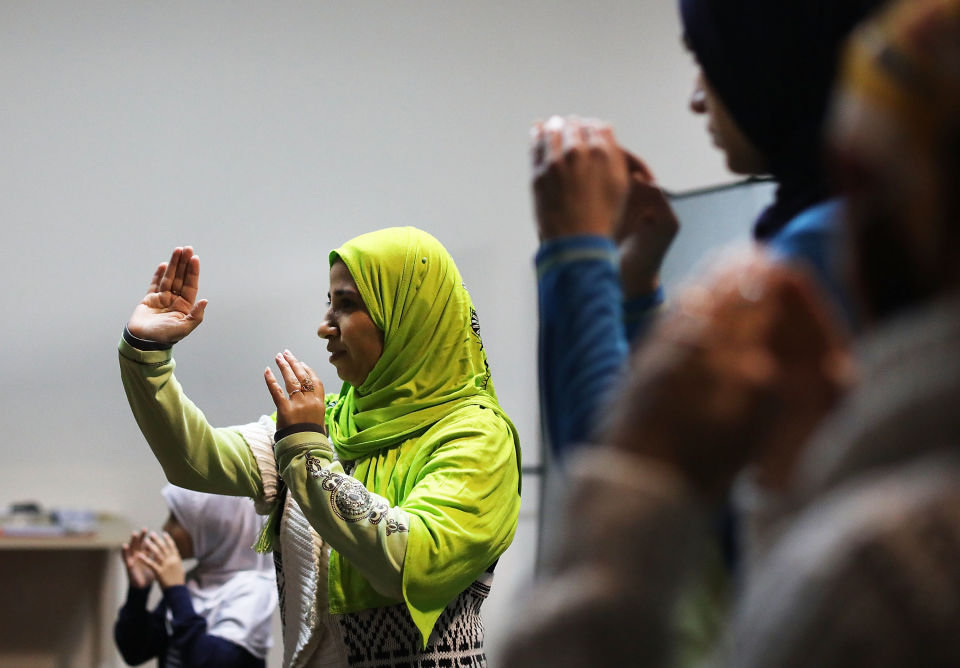 ❝ The Trump era has, so far, been a violent one. Since Donald Trump announced his presidential campaign in the summer of 2015, assaults of pro-Trump and anti-Trump protesters, as well as journalists covering the 2016 campaign, have made headlines. Meanwhile, Federal Bureau of Investigation data has found that hate crimes against Muslims increased by 67 percent in 2015, while the Council on American-Islamic Relations reports that those same crimes increased by 44 percent in 2016. In response, leftist activists and minority groups have turned to a form of activism that some might not typically expect from liberals: to counter and prevent violence, they are heading to the gym to learn self-defense.

❝ The list of these new self-defense initiatives is long…the company Trigger Happy Firearms Instruction holds firearms lessons for women in several cities across the United States with the ultimate aim of teaching a million to shoot. And in April, the Chicago-based group Haymaker Collective formed—and is currently raising funds—to open a sliding-scale fee gym where anyone (except politicians and police officers, who the collective does not trust to keep them safe) can take self-defense classes and work out regardless of income, gender, sexuality, race, ability, or religion. Their end goal is to help people “learn the skills they need to stay safe in Trump’s America,” …

❝ In American culture, self-defense is usually associated with conservative policies that aim to preserve (and/or broadly interpret) the Fourth Amendment and national security. Consider Stand Your Ground laws, which allow residents of some states to use lethal force in self-defense against intruders without first attempting to flee; or the language of protection that Trump and members of his administration have used to promote the administration’s travel ban on several Muslim-majority countries. Nevertheless, leftists have long prepared for violent, politically divided times too — albeit with a very different approach. While conservatives have often organized measures that ostensibly help keep everyone safe but ultimately serve to preserve a status quo, leftists have historically practiced and taught self-defense techniques to empower marginalized communities.

Interested read, worthwhile for folks who haven’t grown up around guns or hunting or – for that matter – armed self-defense. Various times, I’ve been around all three, individually or collectively. Growing up in the “Arsenal of America” mine was the first generation in my family that didn’t spend time working for one or another firearms manufacturer in Connecticut.

❝ It’s almost hard to believe Brice Portolano’s photographs that look straight out of a medieval era only came about because of social media.

Portolano, a photographer from Paris, first discovered horseback archery when he saw pictures on Facebook that his friend Anna Minkkinen had posted of Iranian world champion Ali Ghoorchian.

❝ Minkkinen, a Finnish student who had been practicing martial arts, sent Ghoorchian a message asking if she could come to Iran and learn more about horseback archery. Ghoorchian said yes, and Portolano tagged along on assignment for a Finnish magazine.

Portolano stayed for 12 days to photograph Minkkinen and Ghoorchian and the intricacies of the ancient sport, which is on UNESCO list of Intangible Cultural Heritage.

Fascinating article. History, art-form, martial arts and sport – all come together in this National Geographic article.

Senators Collins and Murkowski with some clown

Early Friday morning, Sen. John McCain showed up to work with cancer and cast the final, and most dramatic vote, to block his party’s effort to repeal Obamacare. He received a round of applause from Democrats, cheers from protesters outside the capitol, and reportedly said of his vote, “I thought it was the right thing to do.”

But two other Republicans were at least equally — and perhaps more — instrumental in killing the latest, and maybe final version of the Republican plan to repeal Obamacare: Sens. Lisa Murkowski and Susan Collins.

And they displayed their concern for working class voters long before McCain’s concern for details.

Collins, the moderate four-term Republican from Maine, was one of the first senators to come out against the earliest Senate version of a repeal-and-replace bill. She hasn’t wavered since. Collins was one of two Republican senators to vote “no” on the motion to move Trumpcare in its multiple and sometimes yet-to-be specified incarnations to the Senate floor for debate…

Ultimately, McCain swooped in to save the day in dramatic fashion. He deserves the praise he is getting for it. But it was Murkowski and Collins more than anybody that ensured the defeat of Trumpcare, and maybe the survival of Obamacare.

McCain hasn’t spent a day of his life without socialized medicine providing his care. From birth to a military father, he has been covered.

The following is from an open letter to iRobot CEO Colin Angle. His company makes the very popular Roomba robotic vacuum cleaner. On Monday, ZDNet’s Jake Smith wrote about iRobot’s intention to sell mapping data from customers’ homes to other companies.

One of the ways Webster defines “dear” is “highly valued” or “precious.” So, when I start a letter with “Dear Colin,”…I’m just using a commonly accepted way of starting a letter.

This is relevant to our discussion because you’ve recently talked about taking from your customers information that is dear to them, even though you’ve never met most of the people who enjoy the benefits of your products. When your customers buy your products, there are some common expectations.

❝ It looks like you may be thinking about or trying to violate those expectations. By extension, it’s looking like you might be violating the trust given to you by your customers. Even worse, you could be opening the door to security risks that are far worse than they would be worth, just so you can make a few extra bucks on the side.

In a recent Reuters interview, you talked about the value of mapping data, both for doing the job of cleaning a room, and for understanding the environment where internet-connected things need to interoperate. So far, I’m with you…

That data could be used to help maximize lighting, tune sound, optimize microphones, determine when people or pets are in a space, and help conserve energy. All that is good…

❝ But here’s the thing that has the whole internet a-flutter. Apparently, you’re trying to sell that mapping data. I understand that…but once you get into the mode of selling data, the potential for abuse rears its oh-so-ugly head.

You’re no longer mapping our homes to make sure you don’t tear out a power cord or fall down a flight of stairs. You’re moving into the realm of spying on your customers. In your case, though, it’s far worse than those stories of possible always-on webcams or TV sets…

See, none of those other devices can move around the house on their own power. If my TV is in the living room, I know it’s there. If I’m concerned about my privacy, I’m probably not going to parade my naked butt in front of it. But a Roomba can decide to wake itself up. It can wander around the house. It can measure, map, and with your onboard camera, even take pictures.

What could go wrong?

The CEO of iRobot has been further interviewed by ZDNet. He denies that the firm will sell customer data. Pls read it. Judge for yourself.

“I am not going to vote for the skinny bill if I’m not assured by the House there will be a conference where my idea and other ideas will be taken up so we can actually repeal Obamacare,” Sen. Lindsey Graham of South Carolina said in a press conference Thursday with Sens. John McCain, Ron Johnson, and Bill Cassidy.

Graham added: “I’m not going to vote for a bill that is terrible policy and horrible politics just because we have to get something done.”

The last-ditch, so-called skinny repeal effort would consist of a series of amendments would aim to repeal certain unpopular parts of the Affordable Care Act, including mandates to get health insurance.

At the end of the 20-hour debate period, if no bill has been picked up, the Senate Majority Leader Mitch McConnell would move on to the “skinny repeal” plan. If passed, it could lead to the House and Senate working together to compromise on one final bill in conference.

After the press conference, House Speaker Paul Ryan expressed a willingness to take the bill to conference.

“If moving forward requires a conference committee, that is something the House is willing to do,” he said.

The four GOP senators said they wanted assurances from House Republican leadership — including House Speaker Paul Ryan and Majority Leader Kevin McCarthy — that they would not pass the bill, which Graham called a “fraud.”

The senators didn’t specify what kind of assurances they would request.

“It’s like pornography. You’ll know it when you see it,” Graham said.

No one in the Senate is ready to take Ryan’s word. If Trump is impeached – and Senators working on that plan to include Pence in any criminal cover-up – Ryan gets to be President. He can taste it, already.

The Senators realize that, too. And BTW everyone expects ANY conference on this bill to fail. Requiring a do-over.

The so-called skinny repeal of Obamacare is the kinder, gentler version of Republican politics. It would only screw 16 million eople out of health insurance.