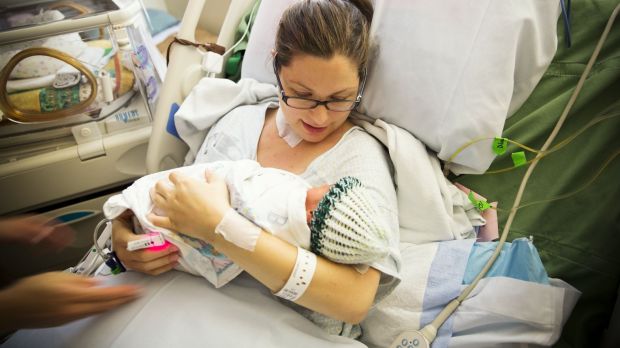 That’s more than three times the rate of the United Kingdom, and about eight times the rates of Netherlands, Norway, and Sweden, according to the OECD.

❝ It’s a stunning example of how poorly the American health care system stacks up against its developed peers. More women in labor or brand new mothers die here than in any other high-income country. And the CDC Foundation estimates that 60 percent of these deaths are preventable…

❝ But as the mortality rate has been edging up nationally, California has made remarkable progress in the opposite direction: Fewer and fewer women are dying in childbirth in the state.

So how did California manage to buck the trend? I was curious, particularly as American women’s health is under assault, with the GOP push to repeal and replace the Affordable Care Act…

RTFA. Long and detailed, Julia Belluz went to California to meet Dr. David Lagrew, an OB-GYN at St. Joseph Hospital in Orange County. A founding member of the CMQCC, the California Maternal Care Quality Collective. Dr. Lagrew leads the fight for sensible hemorrhage protocols that save lives – and the fight to end unnecessary C-sections which set the stage for so many deaths-by-hemorrhage in the United States.

Here’s a link to home base for current NASA science on Greenland’s meltdown.

I typify this as American sophistry at its political zenith for obvious reasons – if you’ve read about and understand the formation and foundations of sophistry. How American politicians turned it into the rationale for every copout foisted upon the body politic.

Life on one side. Death on the other. And it needn’t matter which side takes which position. That’s what needs to be understood. Obviously the best Congressional solution eventually lies between the two. Pick a war in the last 70 years!