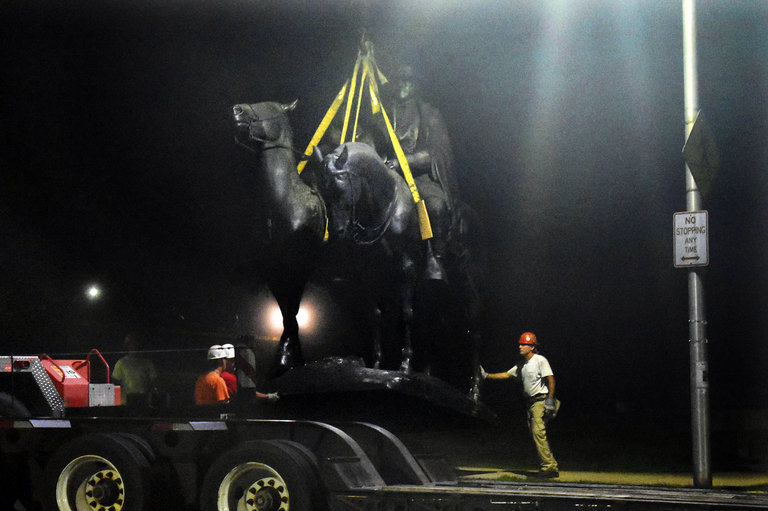 ❝ Confederate statues in Baltimore were removed from their bases overnight by city contractors, who used heavy machinery to load them onto flat bed trucks and haul them away — an abrupt end to more than a year of indecision on what to do with the memorials.

Mayor Catherine Pugh, who made the decision Tuesday morning to remove the monuments overnight, watched in person as the four statues linked to the Confederacy were torn from their pedestals.

…The mayor said. “There was enough grandstanding, enough speeches being made. Get it done.”

❝ The Baltimore City Council had unanimously passed a resolution this week calling for their removal amid a renewed national conversation following a deadly terrorist attack by a white supremacist at a rally in Charlottesville, Va. on Saturday…

❝ Protesters, who held a rally at the Robert E. Lee-“Stonewall” Jackson Monument at Wyman Park Dell near Johns Hopkins University Sunday, had pledged to tear down that statue themselves Wednesday night if the city didn’t…

“It’s done,” Pugh said Wednesday morning. “They needed to come down. My concern is for the safety and security of our people. We moved as quickly as we could…I did not want to endanger people in my own city.”

❝ The city is still deciding what to do with the removed statues, Pugh said, and she did not reveal where they had been taken in the meantime.

The only “polite” suggestion I can come up with is to melt them down, roll the lumps into sheet metal, stamp out commemorative coins for everyone from the brave soldiers who fought against Confederate separatists – and the traitors who led them – to modern-day civil rights leaders and activists.

5 thoughts on “No Grandstanding — Confederate monuments removed from Baltimore overnight”