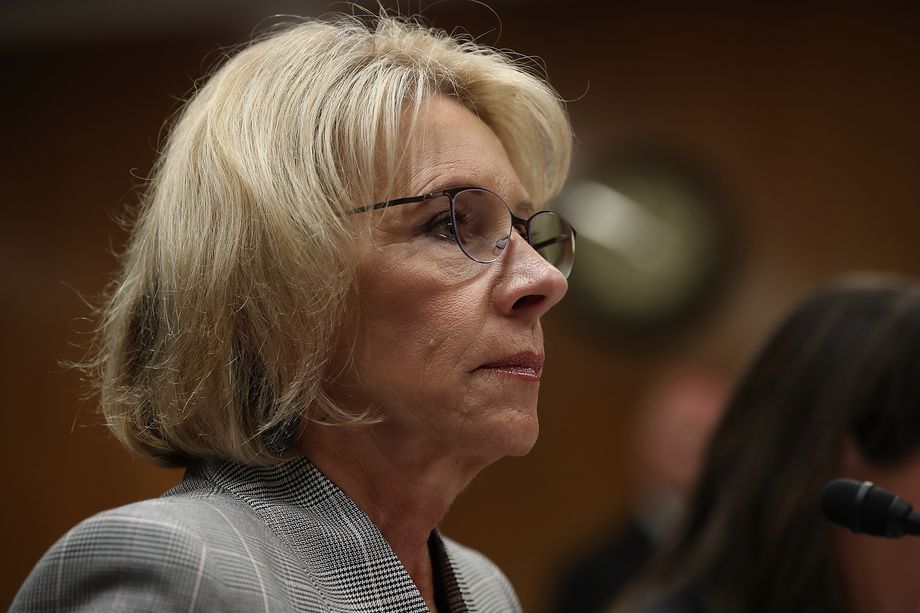 ❝ The education department is rescinding Obama-era guidelines, a move survivors and advocates have long feared.

❝ On Friday the Department of Education announced it would rescind the Obama administration’s 2011 guidelines on schools’ responsibilities under Title IX, a move advocates have long feared would discourage survivors from reporting assault and encourage schools to use unfair or ineffective investigation practices.

Schools do need to do a better job of responding to sexual assault allegations and protecting students. But DeVos’s approach — which has included taking advice from those who have questioned and targeted sexual assault survivors — is likely to do more harm than good…

❝ In a speech at George Mason University, Betsy DeVos listed a number of situations in which she argued that “the failed system” put in place by the Obama administration had resulted in inequities either for survivors or for students accused of sexual assault. And she argued that “overreach” by schools and “the heavy hand of Washington” had ruined the lives of survivors and the accused alike…

Even before this announcement, the education department had sent strong signals that enforcing the 2011 letter wasn’t a priority. The department announced this summer that it would no longer require investigators to collect data on schools’ past behavior as part of civil rights investigations. This indicates to schools that the department will be less thorough in looking into whether they are following the guidelines or not.

Blaming the victim is back in fashion in Congress and the White House. Trump installing Betsy DeVos in charge of Education at the Cabinet level pretty much assured that. 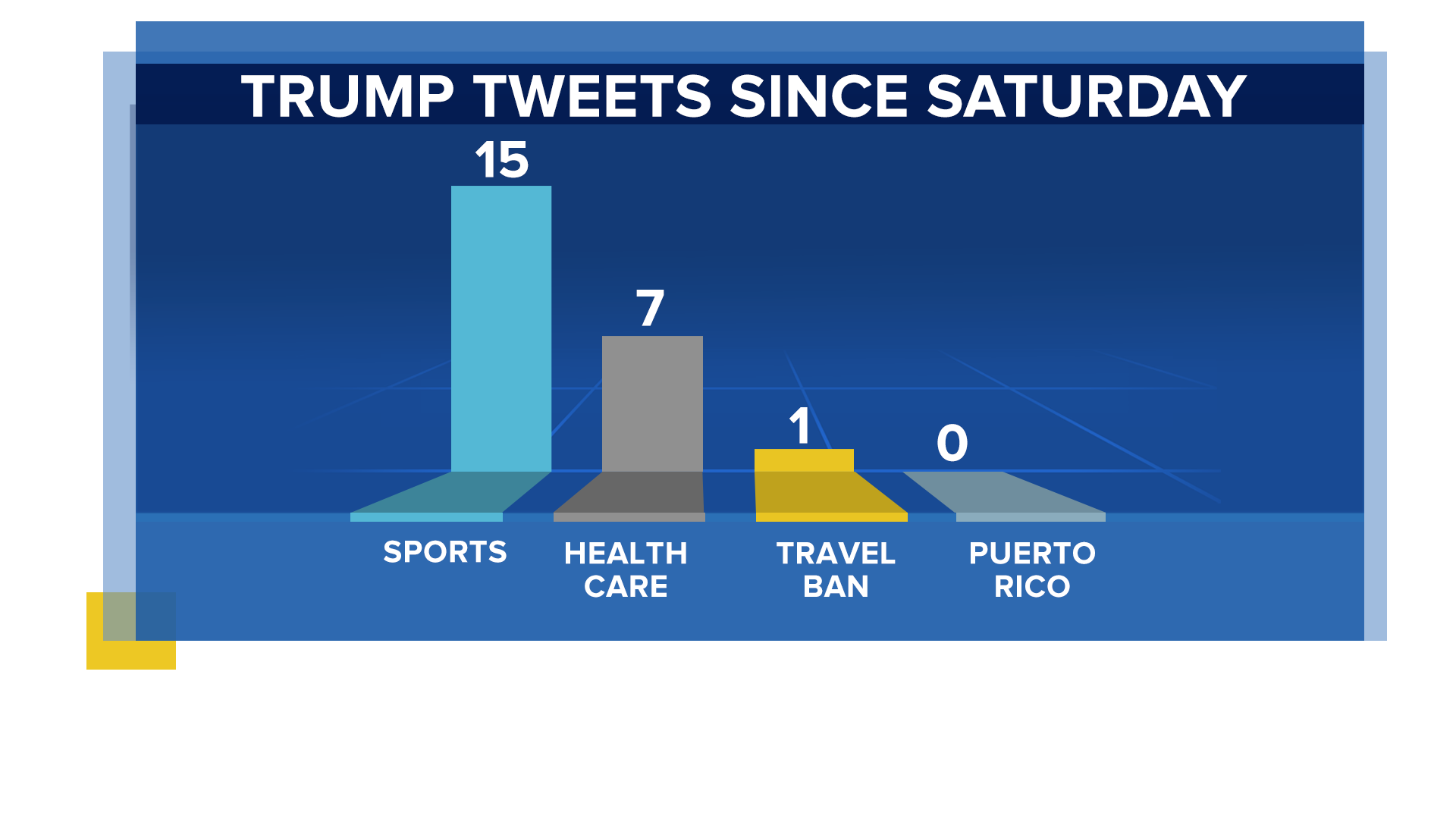 Our Fake President spent the weekend whining about athletes exercising their constitutional right to Free Speech – completely ignoring 3 million Americans in a disaster, running out of water, food, medical aid and housing.

How to kill your best friend

❝ Dogs are like small children. They tend to explore their environments by putting whatever they can find in their mouths, as well as sniffing about your carpet, your furniture, and your lap. It’s no surprise, then, that your canine friend can be harmed by toxic chemicals in your environment. New research confirms that dogs living in smoking homes are more likely to suffer from DNA damage and show signs of premature aging than those living in non-smoking homes.

❝ In people, the potential health risks of smoking and inhaling second-hand smoke are well documented. But to understand how environmental tobacco affects our pets, Natalie Hutchinson, a veterinary researcher at the University of Glasgow, recruited 42 dogs and their owners, approximately half of whom lived in smoking homes and half in non-smoking homes. Each of the dog owners completed a survey about their smoking habits, frequency, and whether they smoked indoors or stepped outside. Then researchers collected blood, hair samples, and cheek swabs from the dogs during a health checkup. They also offered free-of-charge neutering, and collected spare tissues for genetic analysis.

❝ A year later, Hutchinson followed up with 25 of the pet owners and conducted some more tests. She found that certain biological markers, such as the presence of nicotine in dogs’ hair, were much higher in dogs exposed to smoke at home and were related to the amount of smoking going on. “The fact that we found significant increases in various biomarkers over just a year’s worth of data is the most worrying part for me,” she says. “Dogs can live up to 10 to 15 years with us, which means they could be exposed to even more harmful effects over time.”

But dogs that came from smoking homes were already showing signs of DNA damage that could lead to shorter lives, Hutchinson says. Their telomeres, which cap and protect the ends of chromosomes, were much shorter compared to dogs from non-smoking homes. Telomeres not only protect DNA from oxidative stress, once they reach a critically short length, cells stop dividing and may even die, Hutchinson explains.

No surprise to me. Still, it’s nice to see the beginnings of scientific research validating what lots of folks know anecdotally.

❝ Located on the outskirts of Kansas City and home to 2,500 soldiers, Fort Leavenworth houses a 4,000-piece art collection, and almost no one knows it exists. The United States Army never meant to hide the collection, but also never meant to amass it.

❝ This year, 119 students from 91 nations will spend almost a year in the accredited master’s-level courses to earn a Master of Military Art and Science. They also have the option of earning one of 12 other degrees by taking additional courses at a nearby university. Officers in foreign armies with the rank equivalent of a U.S. Army major are eligible to apply within their respective countries; the U.S. State Department and Department of Defense choose which nations may send students…

❝ Over the years, several, if not most of the esteemed officers presented something to the college upon graduating — but most of the items disappeared into storage. A select few adorned private offices and hallways, until they became part of the furniture, common objects no one gave much thought to.

Intricately carved ivory sailboats, gold-plated swords, and hand-worked pewter vases silently joined jewelry, bronze statues, and detailed ebony masks in the storage room. Regardless of the material or value, LaMoe says his obligation as a government employee is to accept the gifts and ensure that they are catalogued and stored properly. Nothing more.

So, the gift collection has grown in the darkness of the storage room for decades.

RTFA. Cataloging the collection must be a journey of delight and intrigue.