❝ Some 130 million years ago, in a galaxy far away, the smoldering cores of two collapsed stars smashed into each other. The resulting explosion sent a burst of gamma rays streaming through space and rippled the very fabric of the universe.

On Aug. 17, those signals reached Earth — and sparked an astronomy revolution.

❝ The distant collision created a “kilonova,” an astronomical marvel that scientists have never seen before. It was the first cosmic event in history to be witnessed via both traditional telescopes, which can observe electromagnetic radiation like gamma rays, and gravitational wave detectors, which sense the wrinkles in space-time produced by distant cataclysms. The detection, which involved thousands of researchers working at more than 70 laboratories and telescopes on every continent, heralds a new era in space research known as “multimessenger astrophysics.”

❝ This is the breakthrough scientists have been waiting for since the initial detection of gravitational waves two years ago. Now, for the first time, they are able to observe the universe using two fundamental forces: light and gravity. By combining traditional visual astronomy with the Nobel Prize-winning work of gravitational wave researchers, astronomers have new means to probe some of their field’s most enduring mysteries: the unknown force that drives the accelerating growth of the universe, the invisible matter that holds galaxies together, and the origins of Earth’s most precious elements…

One of those times I wish I was 60 or 70 years younger, ready to direct my life’s studies. Amazing stuff happening and it’s only going to get more interesting with the kind of growth in computing horsepower we’re looking at.

❝ Modern conservatives have been lying about taxes pretty much from the beginning of their movement. Made-up sob stories about family farms broken up to pay inheritance taxes, magical claims about self-financing tax cuts, and so on go all the way back to the 1970s. But the selling of tax cuts under Trump has taken things to a whole new level, both in terms of the brazenness of the lies and their sheer number. Both the depth and the breadth of the dishonesty make it hard even for those of us who do this for a living to keep track.

In fact, when I set out to make a list of the bigger lies, I thought there would be six or seven, and was surprised to come up with ten…

❝ Lie #1: America is the most highly-taxed country in the world

This is a Trump special: he’s said it many, many times, most recently just this past week. Each time, fact-checkers have piled on to point out that it’s false. Here’s taxes as a percentage of GDP, from the OECD: 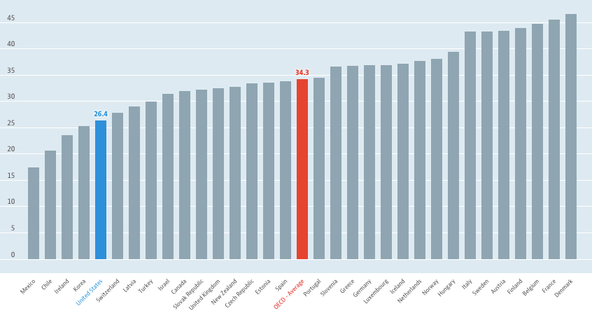 ❝ The blue bar is the US; the red bar the average for advanced countries.

Why does Trump keep repeating what even he has to know by now is a flat lie? I suspect it’s a power thing: he enjoys showing that he can lie repeatedly through his teeth, be caught red-handed in his lie again and again, and his followers will still believe him rather than the “fake news” media.

Read ’em and weep, folks. Paul Krugman nails our fake president. The chumps who voted for the Trump simply do not care if he lies. They love his misogyny, racism, broadcast bigotry and unabashed ignorance. He doesn’t have to know more than they do. Little enough is good enough for hypocrites. And losers.