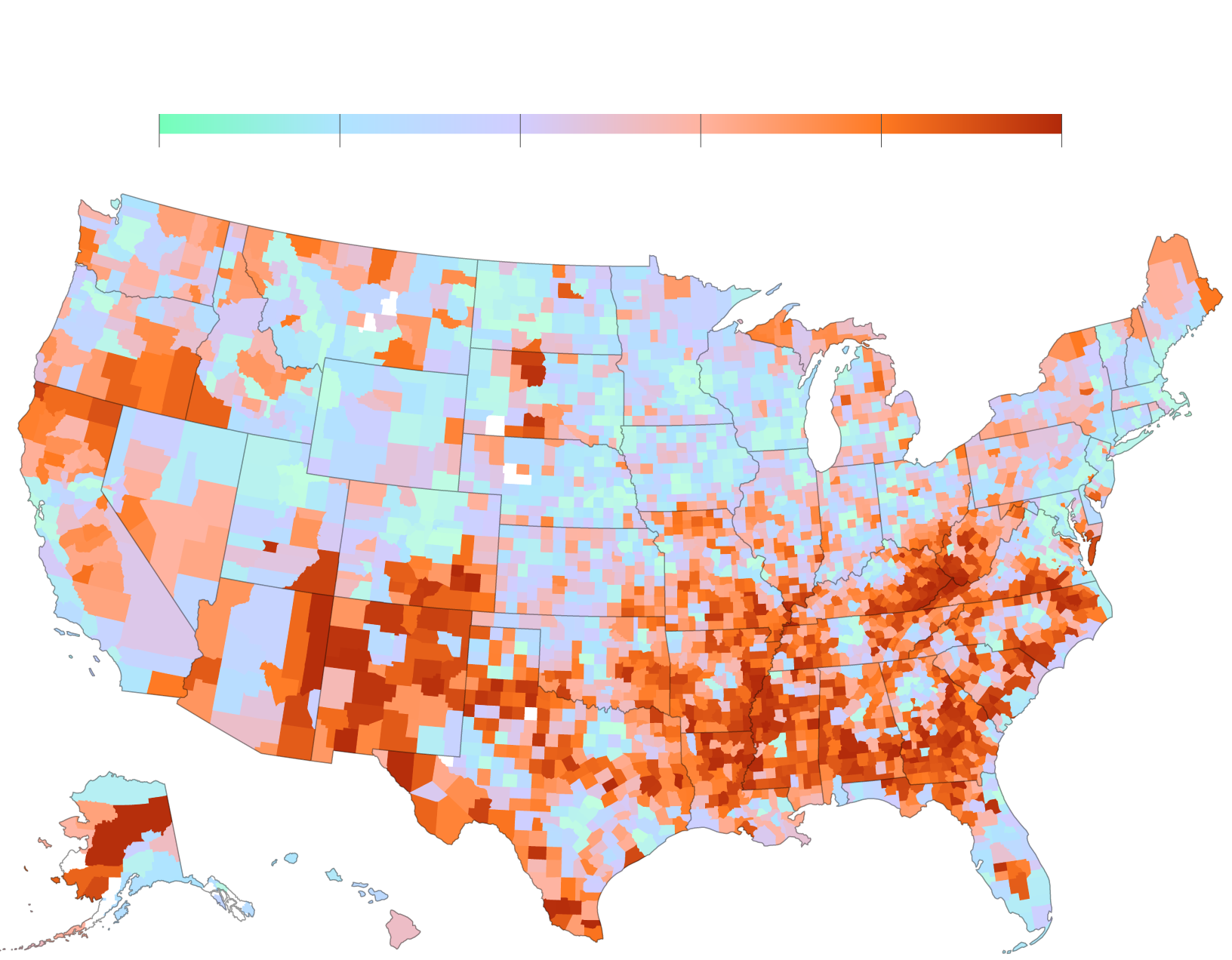 ❝ Economic prosperity is concentrated in America’s elite zip codes, but economic stability outside of those communities is rapidly deteriorating.

❝ U.S. geographical economic inequality is growing, meaning your economic opportunity is more tied to your location than ever before. A large portion of the country is being left behind by today’s economy, according to a county-by-county report released this morning by the Economic Innovation Group, a non-profit research and advocacy organization. This was a major election theme that helped thrust Donald Trump to the White House…

Not that he has a clue or inclination about repairing any of this.

❝ The fastest growing western cities (such as Gilbert, Ariz., and Plano, Texas) and “tech hubs” (Seattle, San Francisco, Austin) dominate the list of the most prosperous cities in the country. Cities that were once industrial powerhouses in the Midwest and Northeast are now more likely to be on the distressed end of the spectrum, like Cleveland and Newark.

“Today’s jobs are going almost exclusively to people with education beyond high school, and those jobs are going to thriving communities,” said John Lettieri, co-founder of EIG. “It’s a self-reinforcing cycle.”

RTFA. Click through to the article – use the link under the map. Conclusions are wishy-washy. The sort of political analysis that illustrates American dedication to sophistry. But, hey, that’s how the Establishment got to limit the whole political process to two Tweedledee and Tweedledumb parties.

Ursa was leaving the library, today, in Portland – when she saw and snapped this evergreen tree wearing leaves that have fallen from a nearby deciduous tree. The recent windstorm & rainstorm helped shape the decorations.

As countries around the world are putting more electric vehicles on the road, they’re also struggling to power those engines. For now, countries are focusing on adding charging stations, but in the future there may be a more mobile option available to drivers: flying drones that come to you.

In early October, the US Patent and Trademark Office granted Amazon the patent for developing a drone that can connect to transfer electricity to a car in motion. Amazon filed the application in 2014, the patent document showed…

How cool is that?

In a nutshell, when the vehicle is low on battery, it will contact a central server, which communicates with the car to figure out the amount of energy needed for its intended destination before sending out an unmanned flying machine with some form of battery to service the car. Several authentication steps would be required to prevent malicious use, according to the filing. The new patent might go well with an earlier Amazon application that envisions recharging stations on top of public street lights for flying drones to use themselves.

So, if you’ve been wandering around the countryside in your full-electric AWD Ford Watanabe checking out new fishing spots – and weren’t paying attention to your car’s charged level – the car will do it for you. A new level of Amazon Prime service may be required. And sounds useful to me. If I was still living my life on the road.

❝ Mount Everest holds the impressive title of ‘tallest mountain in the world,’ but many people don’t know about its other, more gruesome title — the world’s largest open-air graveyard…

❝ The top portion of the mountain, roughly everything above 26,000 feet, is known as the “death zone.”
There, the oxygen levels are only at a third of what they are at sea level, and the barometric pressure causes weight to feel ten times heavier. The combination of the two makes climbers feel sluggish, disoriented and fatigued and can cause extreme distress on organs. For this reason, climbers don’t usually last more than 48 hours in this area.

The climbers that do are usually left with lingering effects. The ones that aren’t so lucky are left where they fall.

❝ Standard protocol is just to leave the dead where they died, and so these corpses remain, to spend eternity on the mountaintop, serving as a warning to climbers, as well as gruesome mile markers.

Truly interesting article. At least to me. I’ve spent a fair piece of outdoors life with serious climbers in the US, Switzerland and France, Scotland and elsewhere. Known a number of successful athletes at this pursuit. A few who died along the way.

RTFA for questions unique to the life and death of high altitude climbing.