❝ Rep. Duncan Hunter is attempting to set up a fund to raise money to pay for lawyers and other costs related to an ongoing FBI criminal investigation into allegations of misused campaign cash, according to documents filed in Congress…

Hunter’s chief of staff, Michael Harrison, did not immediately returns calls and emails seeking clarification about the status of the fund or how much money had been raised or spent…

A subsequent investigation by the Union-Tribune found a host of other potentially improper expenses, including for oral surgery, groceries, garage door repair, surfing equipment, dance recital trips, school lunches and airfare for the family rabbit…

Understand that the greed and excess practiced by the thugs imported into our government by the Fake President are nothing new. Pimps and phonies in Congress like Hunter have been stealing like this for decades. 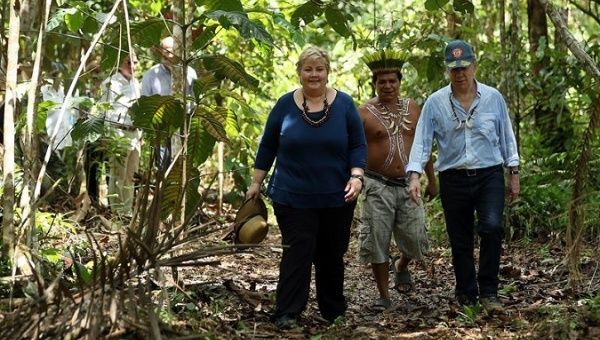 ❝ Colombia’s fight against illegal logging is being extended to 2025 as part of the nation’s pay-for results strategy, Norway’s prime minister announced after donating US$250 million to the project.

As part of the 2015 pact signed between Germany, the United Kingdom, Norway and Colombia, Norwegian Prime Minister Erna Solberg confirmed the cooperative battle to save Colombia’s rainforest would be extended by five years…

❝ Colombian Environment Minister Luis Gilberto Murillo said that within the next 12 years the government hopes to reduce deforestation to zero.

Norway’s donation represents the first alliance of climate and forest under the Paris Agreement. Prime Minister Solberg hopes the agreement will bring higher standards for inter-institutional collaboration in climate initiatives.

The Paris Agreement is just another one of those historically useful, politically constructive agreements, constructed by smart politicians in modern nations.

So, of course, our fake president withdrew the United States from all provisions of this agreement. And BTW, at minimum projected costs, a donation like this is less than 3 new F35s, the latest toy for our military..