The pins she wore —

❝ High school teacher Mandy Manning appeared at the White House Thursday to accept the National Teacher of the Year award, but she had a higher goal in mind: to give President Donald Trump 45 letters written by current and former students at her school.

Manning, who teaches English to immigrant and refugee students at the Newcomer Center at Joel E. Ferris High School in Spokane, Washington, gave a speech at the ceremony, where she reportedly refused to shake Trump’s hand or applaud for him.

RTFA. Someone has no doubt explained all this to our fake president by now. Of course, he’ll pretend he knew it all beforehand and was just being a nice guy. Something he is incapable of doing – other than as a practice lesson in hypocrisy. 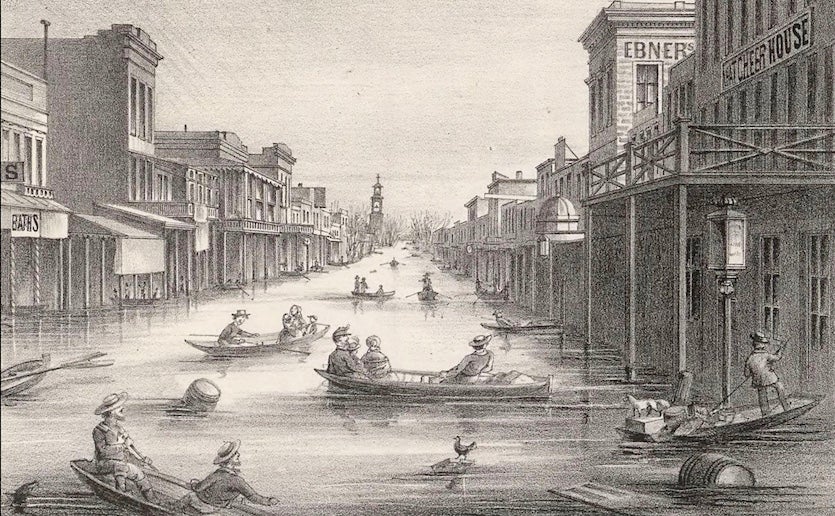 K Street in Sacramento during the Great Flood of 1862

❝ Abrupt transitions in California from a parched winter to a soggy one, as observed in the mid-2010s, will become more common if greenhouse gases continue to increase, according to a study published Monday in Nature Climate Change. This “precipitation whiplash” has implications for both wildfire and flood risk. The research also suggests that California’s wet season is likely to contract, and the shorter wet seasons will become more variable, with an increase in both extra-dry and extra-wet winters.

❝ Led by Daniel Swain, UCLA, the study employed 40 climate simulations from the NCAR Community Earth System Model. This large ensemble…has been used to simulate climate in preindustrial times as well as the 21st century. Swain and colleagues examined output for the high-emissions or “business as usual” scenario…It assumes that fossil fuel burning will continue to add ever-increasing amounts of greenhouse gas to the air until the late 21st century.

❝ One of the most worrisome findings is an enhanced risk of extremely wet winters. The modeling indicates that 40-day-long rainfall stretches on par with those observed during the “Great Flood” winter of 1861-62 will be more than three times more likely by the 2070s-2090s than they were prior to human-produced greenhouse gases. A large swath of California’s Central Valley was inundated in early 1862 by torrential rains that produced more than 10 feet of flooding, putting downtown Sacramento under water…a repeat of this event could produce hundreds of billions of dollars in damage…

Although wet seasons are expected to get shorter on average—pinched between drier autumns and drier springs statewide—the study also projects that the midwinter jet stream will tend to carry more moisture, a well-understood byproduct of a warming climate. At certain times, this juiced-up jet stream could pack a very big wallop. More than two-thirds of the 40 ensemble members indicate that two or more 1862-magnitude rain events could occur in this century across the state.

Which is why “climate change” is a more accurate term than global warming, etc., which infers only one style of dynamic change. Nope. We all can look forward to lots of mostly unhappy stuff happening.