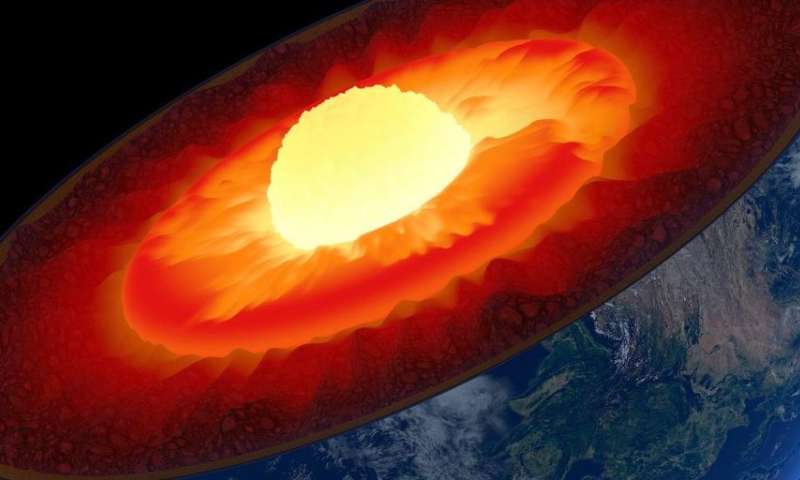 ❝ Researchers at CU Boulder report that they may have solved a geophysical mystery, pinning down the likely cause of a phenomenon that resembles a wrench in the engine of the planet.

…the team explored the physics of “stagnant slabs.” These geophysical oddities form when huge chunks of Earth’s oceanic plates are forced deep underground at the edges of certain continental plates. The chunks sink down into the planet’s interior for hundreds of miles until they suddenly—and for reasons scientists can’t explain—stop like a stalled car.

❝ CU Boulder’s Wei Mao and Shijie Zhong, however, may have found the reason for that halt. Using computer simulations, the researchers examined a series of stagnant slabs in the Pacific Ocean near Japan and the Philippines. They discovered that these cold rocks seem to be sliding on a thin layer of weak material lying at the boundary of the planet’s upper and lower mantle—roughly 660 kilometers, or 410 miles, below the surface.

And the stoppage is likely temporary…

RTFA. Helluva movie plot – unless we suffer a blowout.

Two-thirds of business economists in the U.S. expect a recession to begin by the end of 2020, while a plurality of respondents say trade policy is the greatest risk to the expansion, according to a new survey.

About 10 percent see the next contraction starting in 2019, 56 percent say 2020 and 33 percent said 2021 or later, according to the Aug. 28-Sept. 17 poll of 51 forecasters issued by the National Association for Business Economics…

Forty-one percent said the biggest downside risk was trade policy, followed by 18 percent of respondents citing higher interest rates and the same share saying it would be a substantial stock-market decline or volatility.

The reality of supply-side economics is failure. Trump’s added difference is in also increasing the national debt another trillion dollar$