Can we have a separate class for Robots in the Summer Olympics some year? 🙂

❝ For large beverage companies, the push into pot is all about the fear of missing out. After getting beat on trends including craft beer, coconut water, and flavored seltzer, the drink giants don’t want to miss the next trendy ingredient: cannabis. Whether it’s the THC that gets you high or the nonpsychoactive CBD, weed components are being infused into drinks with an eye toward the mass market…

❝ Legal marijuana sales are expected to rise to $11 billion in the U.S. this year, from $9 billion in 2017, and cannabis-infused beverages account for less than 1 percent of that. But a recent report from the bank Canaccord Genuity Group Inc. estimated that sales of drinks infused with THC or CBD, forecast to make up 20 percent of the edibles market, will reach $600 million in sales in the U.S. by 2022. In Colorado, which became the first state to legalize recreational marijuana in 2014, sales of cannabis drinks almost doubled in 2017 and are up an additional 18 percent in the first half of this year, according to Flowhub LLC, which tracks marijuana sales data.

If you’re an investor don’t miss the chance to catch the next wave. Someone like me who doesn’t smoke ANYTHING and simply stopped drinking most anything alcoholic, as well, from lack of interest years ago is only interested in products which might make for tasty scones or Alice B Toklas brownies. Though I admit to owning a few shares of a leading grower in the Great White North. 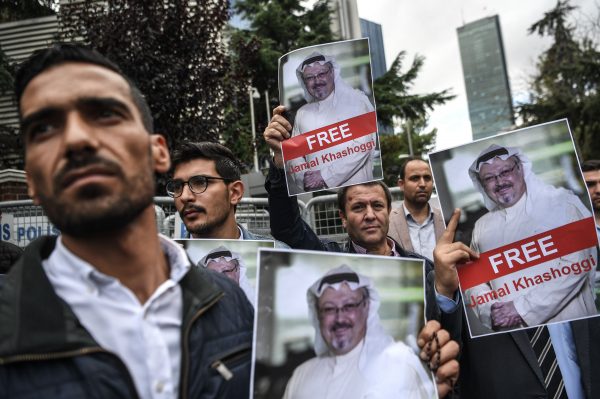 ❝ Jamal Khashoggi entered the Saudi counsulate in Istanbul on October 2 to obtain a document certifying he divorced his ex-wife – never to be seen since.

Turkish sources have told media outlets they believe the Saudi writer and critic was killed inside the consulate in what they describe as “premeditated murder”.

Based on US intelligence intercepts, Saudi officials were heard discussing a plan to lure Khashoggi from the US state of Virginia, where he resides, back to Saudi Arabia where he would be detained, the newspaper said, citing unnamed US officials…

❝ A team of 15 Saudis flew into Istanbul last week, drove to the Saudi consulate and then departed that same day on private planes headed for Cairo and Dubai. This is according to The Washington Post, which has been tracking the disappearance of Saudi journalist Jamal Khashoggi.

SHANE HARRIS: I don’t think we fully know the intent. And I think you’re right. Fifteen people is a lot to kill one individual. And a former U.S. official I spoke to about this said it actually bears a lot of the hallmarks of a rendition or a kidnapping operation. But we still don’t know. But what we are understanding is that the U.S. government was picking up intelligence that the Saudis wanted for some time to capture Khashoggi – not clear whether they wanted to capture and prosecute him or whether they want to interrogate him or kill him but that there was some high-level interest on the part of the government of getting him in some way.

No mention of any attempt by anyone in the White House or Trumpo to warn Khashoggi. Something required by US law and convention – even for non-citizens. 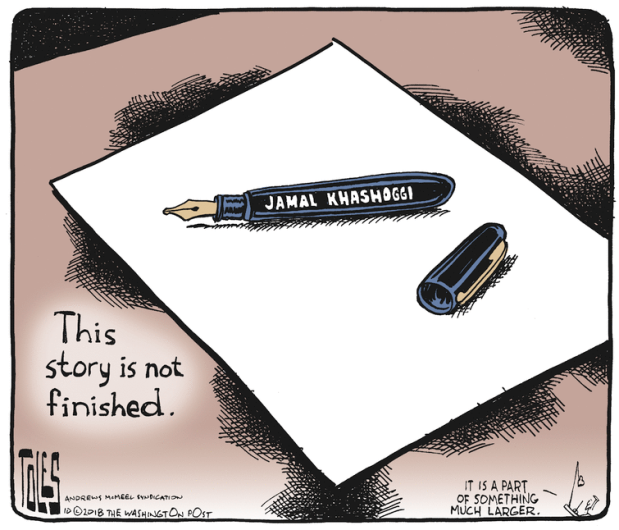