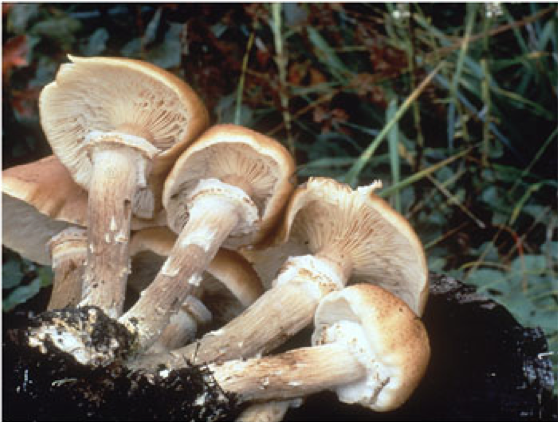 A. gallica sprouting as honey mushrooms — James B. Anderson

When University of Toronto biologist James B. Anderson first studied this large growth in 1992, he was astounded by its sheer size. Anderson and his colleagues estimated that it was 1,500 years old, weighed 100,000 kilograms (110 tons) and covered around 37 acres (15 hectares) of forest floor in Michigan’s Upper Peninsula…

Looking at hundreds of samples taken from 2015 to 2017, Anderson had to revise his earlier estimates. As he points out in his updated study, the gigantic fungus is actually closer to 2,500 years old and it weighs around 400,000 kilograms, or 440 tons. The growth covers about 173 acres (70 hectares), which is roughly the same size as the total floor area of the Pentagon building.

The estimate, BTW, is deliberately kept to the lower bounds. Phew!

❝ “When people get in line that have absolutely no right to vote and they go around in circles. Sometimes they go to their car, put on a different hat, put on a different shirt, come in and vote again. Nobody takes anything. It’s really a disgrace what’s going on.”

❝ “If you buy a box of cereal — you have a voter ID. They try to shame everybody by calling them racist, or calling them something, anything they can think of, when you say you want voter ID. But voter ID is a very important thing.”

If you think about it – it was some turkey who sent them there!