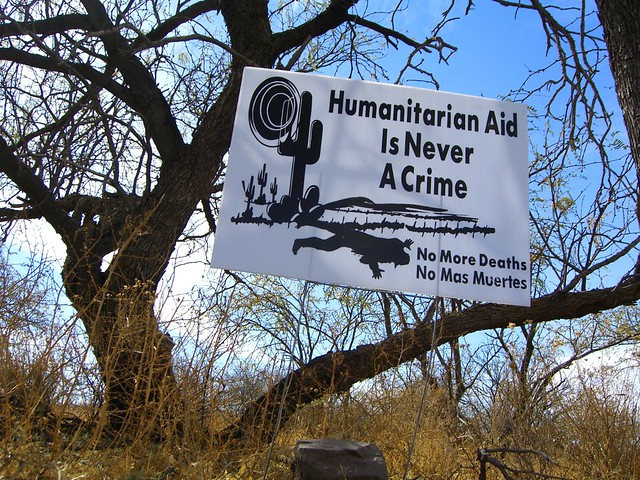 ❝ A United States federal court is weighing in on the case of volunteer Scott Warren, who is on trial and facing 20 years in prison on “smuggling” charges for aiding a pair of undocumented migrants in Arizona.

A member of the humanitarian group, No More Deaths, Warren was taken to trial Tuesday on three felony charges: two for allegedly harboring an immigrant couple and one for conspiring to transport them.

❝ The thirty-six-year-old man was arrested on Jan. 17, 2018 after Border Patrol agents set up surveillance around one of the organization’s humanitarian aid shelters in Ajo, Arizona.

❝ “It is life or death here. And a decision not to give somebody food or water could lead to that person dying,” Dr. Scott Warren said, adding that he has shared food, water, and shelter to dozens of people braving the deadly desert outside his home…

“It is scary to be intimidated like this and to be targeted but there really is no choice,” said Warren, who believes that the state may be expanding their definition of “harbor.”

State governments and the Feds are no strangers to arbitrarily changing definitions to suit the politics of the moment. With a thug in the White House who campaigned on illegal migrants being subhuman and criminal in the eyes of his supporters – anyone who offers life-preserving aid to folks in Southwestern deserts must be equally criminal.

This is what our government and the contemptible snobs who adore our fake president would have us be.