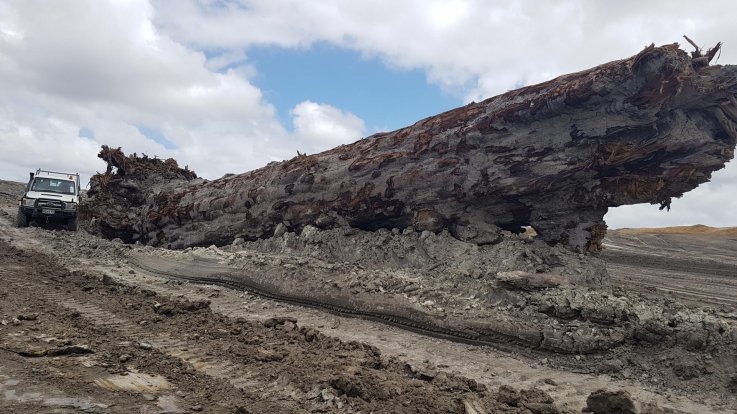 ❝ An ancient tree that contains a record of a reversal of Earth’s magnetic field has been discovered in New Zealand. The tree—an Agathis australis, better known as its Māori name kauri—was found in Ngawha, on New Zealand’s North Island, during excavation work for the expansion of a geothermal power plant…

❝ The lifespan of the kauri tree covers a point in Earth’s history when the magnetic field almost reversed. At this time, the magnetic north and south went on an excursion but did not quite complete a full reversal.

Looking forward to a polished picture of the tree rings.

❝ Injecting race into his criticism of liberal Democrats, President Trump said four congresswomen of color should go back to the ‘‘broken and crime infested’’ countries they came from…blah, blah, blah!…ignoring the fact that all of the women are American citizens and three were born in the US…

❝ Following a familiar script, Republicans remained largely silent after Trump’s Sunday morning broadsides that caused Democrats to set aside their internal rifts to rise up in a united chorus against the president.

I expect little or nothing from Congressional Republicans. They haven’t much of any membership left that gets upset about racism or bigotry unless it threatens their almighty dollar$. Frankly, I haven’t expected the Democrats in Congress to show anymore courage or principles than the rightwing nutballs controlling the GOP. Apparently, the new blood added in 2016, grassroots rejection of the Democrats’ longtime lameduck mentality…is having some effect.

I hope it carries on through the primary season to something more than a lip-service platform and lifers who sit on their hands and wallets.

❝ A Christian group known as Return to Order (ran) a campaign to urge Netflix to remove the show Good Omens…which was released on Amazon…The limited series—based on a 1990 novel written by Terry Pratchett and Neil Gaiman—tells the story of a demon and angel joining forces to stop Armageddon. It’s a show that celebrates unity during these divisive times.

❝ But, as the Guardian first reported, Return to Order doesn’t approve of the forces of heaven and hell uniting for a common goal. The group, which is essentially a brand extension of the book Return to Order by biblical scholar John Horvat II, created a petition urging Netflix to “pull the series at once,” and, “Stop promoting evil!” Again, Netflix can’t do either of those things because it doesn’t produce or stream the show Good Omens, Amazon does…

❝ The petition page…mentioned several reasons that the show is “blasphemous.” Among Return to Order’s concerns are the series featuring an angel and a demon as close friends, “God is voiced by a woman,” the antichrist is “portrayed as a normal kid that has special powers,” and the “four riders of the Apocalypse, God’s means of punishing sinful earth, are portrayed as a group of bikers.”

Religious nutters won’t stop being nutters, They do apparently comprehend looking silly. They’ve rerouted their protest to Amazon. Not so incidentally, Amazon folks enjoyed the chuckle, too.

BTW, I found the series to be just one of the best things on the telly, this summer.