Shows Pence how to pardon himself [Trump] after impeachment

❝ Governor Andrew M. Cuomo today announced he signed legislation…to close New York’s double jeopardy legal loophole that protects individuals who are pardoned by a President from being prosecuted at the state level for the same offense. This key reform, which was an Attorney General’s program bill, gives New York prosecutors discretion to pursue prosecution of criminal acts where they have jurisdiction.

❝ “No one is above the law and New York will not turn a blind eye to criminality, no matter who seeks to protect them,” Governor Cuomo said. “The closure of this egregious loophole gives prosecutors the ability to stand up against any abuse of power, and helps ensure that no politically motivated, self-serving action is sanctioned under law. I thank the Attorney General Letitia James for her work to advance this much-needed reform and by signing it into law we are taking another step toward a stronger, fairer and more just Empire State for all.”

❝ The statutory change takes effect immediately and applies to future and past offenses, provided the person has not already been tried or entered a plea.

Trump has done everything but publicly pledge to use his pardon power to allow friends and associates off the hook. Now, the Double Jeopardy jailbreak is closed in New York.

And it goes downhill from there! 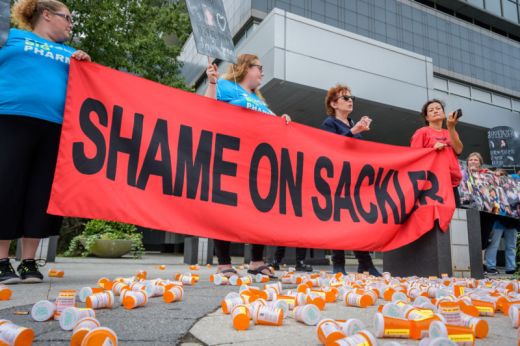 ❝ OxyContin-maker Purdue Pharma and its billionaire owners, the Sacklers, on Friday got a temporary reprieve from lingering court battles over their alleged role in fueling the opioid crisis. In exchange, they may have to be more forthcoming about what happened to all the OxyContin money.

❝ US bankruptcy Judge Robert Drain temporarily halted state lawsuits against Purdue as well as the Sacklers — though only Purdue has filed for bankruptcy protections. In pausing the states’ cases, Judge Drain cited Purdue’s mounting legal expenses, which he noted is money that could otherwise go toward addressing the opioid crisis and its victims…

❝ Purdue is estimated to have made more than $35 billion from OxyContin sales, and the Sacklers reportedly siphoned off as much as $13 billion of that into their own pockets.

Out of the kindness of their collective hearts, the Sacklers have in return promised the court they’ll stop hiding the money and even answer questions truthfully. What fracking planet did these greedy bastards grow up on? These are the sort of rules the rest of us are required to live by our whole lives.