A young child with such a grown-up heart…

A number of competent economists have written of the origins of racism as a “successful” defense of slavery. In the days of slavery being one of the supports of the economy of this new nation fighting to survive disengagement from status as a British colony – a believable rationale was needed to defend the white, rural, wealthy supporters of our revolution who relied on an economic system centuries out of date that worked “well enough” to keep and maintain their political power.

So, now, Trump and his followers wheedle their support for “very fine people on both sides” – a tagline that worked well enough to satisfy a majority of electors in the 2016 election, the leaders of the Republican Party ever since. 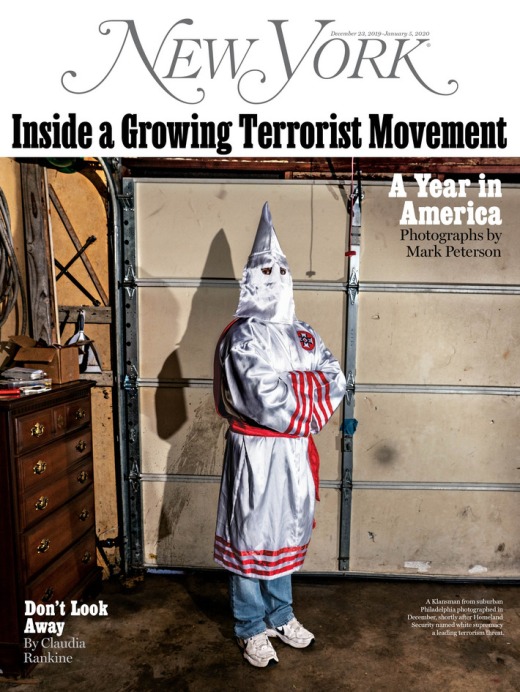 ” New York’s December 23, 2019–January 5, 2020 issue confronts America’s growing white supremacy movement through a photo-documentary portfolio by Mark Peterson and an essay by poet and National Book Award–nominated author Claudia Rankine. “It is our inheritance,” Rankine writes. “Institutionalized since the Civil War by a government that only recently, and tentatively, began to address domestic terrorism for what it is…”

” James Walsh, a writer at New York, contributed additional research and reporting in order to bring readers more context to the phenomenon. He spoke with Nate Snyder, a former counterterrorism official in the Department of Homeland Security, who notes that Trump’s rhetoric has had an impact on the movement’s rebirth. After Trump’s comments about Charlottesville, his infamous words about “very fine people on both sides,” Snyder says: “You saw activity on [neo-nazi site Stormfront] exponentially spike. “It was a validation point. You started seeing posts like ‘We now have an ally in the White House…'”

RTFA. The time to speak up on a national scale, from pages and pulpits that thrive on moderation, is overdue. Nice folks can no longer turn their back on the most vicious, reactionary stream polluting American culture.