The Fake President and his governing Republican Party don’t think so! 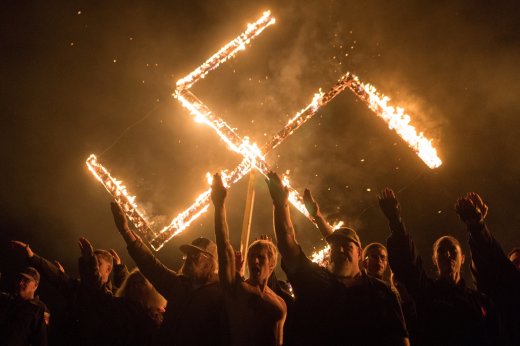 Rep. Max Rose (D-N.Y.) and former FBI agent Ali Soufan warned on Tuesday that U.S. law enforcement has not kept pace with the threat posed by international white supremacist extremism in an op-ed published in The New York Times.

Soufan and Rose, a U.S. Army veteran, cited global organizations such as the American militant group The Base, the Scandinavia-based Nordic Resistance Movement and the Ukrainian Azov Battalion, all of which have allegedly threatened or targeted both men.

Rose and Soufan said these groups are interconnected, prompting individuals in different countries — such as the Australian man accused of killing 51 people at two New Zealand mosques last year — to commit acts of violence…

The problem, the lawmaker and former FBI agent asserted, is that the U.S. government has yet to designate these groups as foreign terrorist organizations, thus prohibiting law enforcement’s efforts to curb the threat the groups represent.

“Terrorism is terrorism, however its perpetrators justify it inside their twisted minds. If these peddlers of hate hoped to silence us by attacking us online, they have failed. They’ve only hardened our resolve,” the op-ed concluded.

Not that there’s anything new or surprising about racism in the GOUSA. That includes terrorist acts of violence and murder. The question to be resolved is will the American electorate do anything about it?

What does a 9 inch ice core sound like when dropped down a 450 foot hole? Like this! Credit to @peter_neff for the idea and @Scripps_Polar, @sciencejenna, @GeosciencesPU, @US_IceDrilling, and @paleosurface for the execution! pic.twitter.com/pW7LxKdbUB

And here’s what the actual research is all about. Interesting enough on it’s own.