An international team of neuroscientists scanned the brains of lifelong bullies and found something grim: Bullies’ brains appear to be physically smaller than other brains.

“Our findings support the idea that, for the small proportion of individuals with life-course-persistent antisocial behaviour, there may be differences in their brain structure that make it difficult for them to develop social skills that prevent them from engaging in antisocial behaviour,” said lead author Christina Carlisi, a researcher at the University College London…

The study found that the brains of people with lifelong patterns of “stealing, aggression and violence, bullying, lying, or repeated failure to take care of work or school responsibilities” were different, physically, from those of the other participants…

A key exception: The brains of people who exhibited anti-social behavior as teenagers but not as adults showed no such abnormalities. That’s good news for reformed bullies, but bad news for the lifers.

And if we’re dealing with bullies who make it to the top tier of American government – not surprising – you have to wonder if small distorted brains correlate with small hands and other smallish bits, eh? 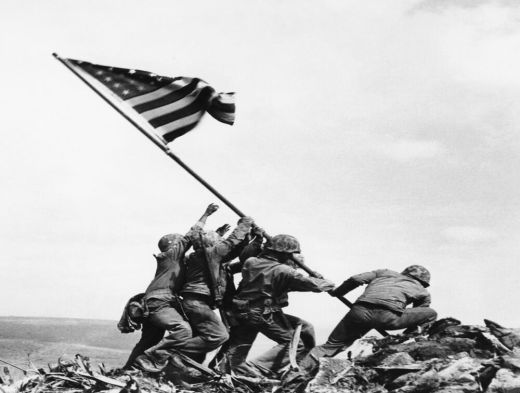 When most Americans think of the World War II battle for Iwo Jima – if they think of it at all, 75 years later – they think of one image: Marines raising the U.S. flag atop Mount Suribachi, the island’s highest point.

That moment, captured in black and white by Associated Press photographer Joe Rosenthal and as a color film by Marine Sergeant William Genaust, is powerful, embodying the spirit of the Marine Corps.

But these pictures are far from the only images of the bloodiest fight in the Marines’ history. A larger library of film, and the men captured on them, is similarly emotionally affecting. It can even bring Americans alive today closer to a war that ended in the middle of the last century…

Please RTFA. I was 7 years old at the time of the Iwo Jima landing. My father was invited to a private showing of the first rough cut of all the footage several weeks later – and brought me. That night is still vivid, stuck in my brain. I cannot forget it.

Over time, I came to better understand what I saw.