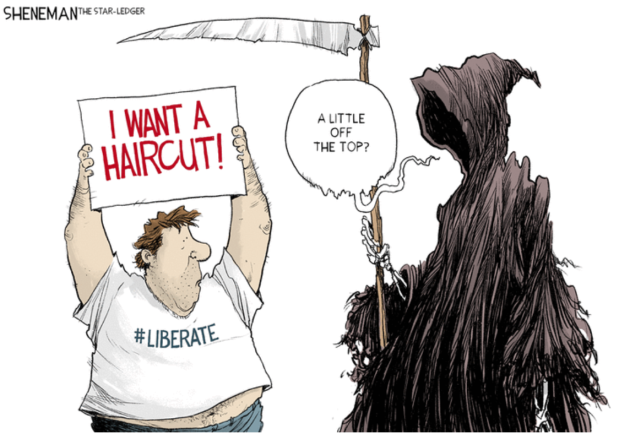 Our fake president declared Monday, May 11, 2020, that “all throughout the country, the numbers are coming down rapidly.”

That was just another lie.

Just 3 days before, he received a report from his coronavirus task force that explained to him that coronavirus infection rates are spiking to new highs in several metropolitan areas and smaller communities across the country…according to undisclosed data the White House’s pandemic task force is using to track rates of infection, which was obtained by NBC News.

The 10 top areas recorded surges of 72.4 percent or greater over a seven-day period compared to the previous week, according to a set of tables produced for the task force by its data and analytics unit. They include Nashville, Tennessee; Des Moines, Iowa; Amarillo, Texas; and — atop the list, with a 650 percent increase — Central City, Kentucky.

On a separate list of “locations to watch,” which didn’t meet the precise criteria for the first set: Charlotte, North Carolina; Kansas City, Missouri; Omaha and Lincoln, Nebraska; Minneapolis; Montgomery, Alabama; Columbus, Ohio; and Phoenix. The rates of new cases in Charlotte and Kansas City represented increases of more than 200 percent over the previous week, and other tables included in the data show clusters in neighboring counties that don’t form geographic areas on their own, such as Wisconsin’s Kenosha and Racine counties, which neighbor each other between Chicago and Milwaukee.

The spiking infection rates suggest that the pandemic is spreading quickly outside major coastal population centers that were early hot spots, while governors of some of the states that are home to new hot spots are following Trump’s advice to relax stay-at-home restrictions.

I still remember the hit song from my teenage-bopper years, “Why do fools fall in love?” Do Trump voters love this idjit so much they’re willing to sit around and watch him kill off more and more Americans just because he can do it? 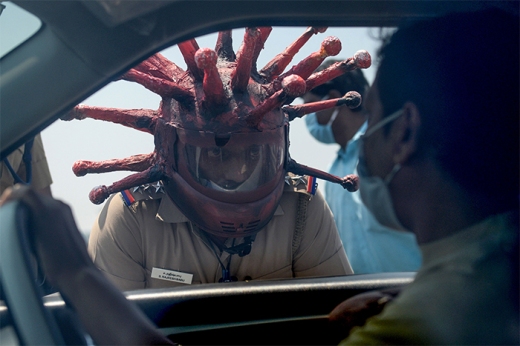 Here’s the hat Trump should wear in public

There is a factory in Pennsylvania, Braskem America, that creates the key component for PPE (Personal Protection Equipment such as masks and gowns). The employees know how crucial it is to get their product out that on March 23, 43 of them literally lived in the factory for 28 days straight, working 12-hour shifts every day. They called it a “live-in.” Braskem America CEO Mark Nikolich stated no one told them they had to do this. All of the workers who stayed volunteered, living at the plant to ensure no one caught the virus as they sought to meet the skyrocketing demand for their key product, polypropylene.

Ever the opportunist, Trump notified management he wanted to visit the factory and the workers there. They all got together and discussed it. They said, NO.

Many thanks to Michelle at motleynews.net for posting this.