Could be even more beautiful if people didn’t keep getting in the way.

When the movie industry ramps back up, states will be competing for their business. the COVID-19 pandemic may actually help give New Mexico an edge. That’s largely because of the state’s coronavirus response which has made it one of the safest places for productions to shoot.

From Transformers to the Breaking Bad franchise, New Mexico has served as the backdrop for dozens of major films and TV shows. One local filmmaker believes a lot more are on the way. “It looks favorable to us because we’re going to health wise look like a better place to shoot,” says Film Crew Trainer Grubb Graebner.

Same as it ever was! 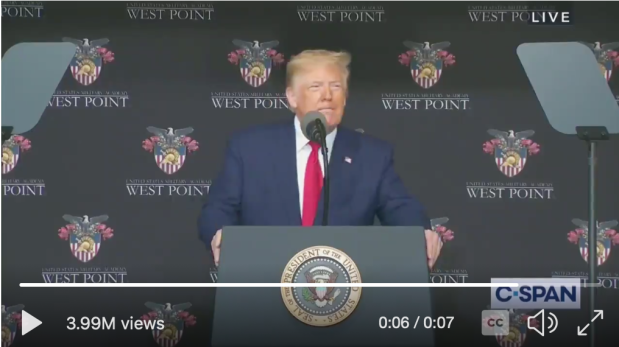 Michelle at motleynews.net posted a video excerpt that makes me suspicious. Here’s her commentary:

Check out this short 7-second clip below (it’s the 2nd video – I’m unable to post it alone due to the way it was tweeted) when trump took a short break during his West Point Military Academy Graduation Speech. This is recent, too, as he held up the bible just fine in front of the church on June 1st. He’s been stumbling over many words for some time now. But this totally looks like he’s had a stroke when he has to use his left hand to lift the water glass he’s holding in his right hand. This is a very good sign that trump will be gone soon.