With clueless in charge, what hints we get are useless.

That has to be the headline of the week! 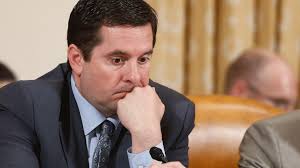 A judge has ruled that Rep. Devin Nunes has no right to sue Twitter over statements made by a fake Internet cow, someone parodying his mother and a Republican strategist.

Judge John Marshall said in a decision Friday that Twitter was “immune from the defamation claims of” Nunes, R-Tulare, due to federal law that says social media companies are not liable for what people post on their platforms…

Nunes “seeks to have the court treat Twitter as the publisher or speaker of the content provided by others based on its allowing or not allowing certain content to be on its internet platform,” Marshall wrote. “The court refuses to do so…”

Absolutely hilarious. A pleasure to see this happen to Congress’ creepiest version of what passes for a Republican conservative, nowadays.

The Arctic heat wave that sent Siberian temperatures soaring to around 100 degrees Fahrenheit on the first day of summer put an exclamation point on an astonishing transformation of the Arctic environment that’s been underway for about 30 years.

As long ago as the 1890s, scientists predicted that increasing levels of carbon dioxide in the atmosphere would lead to a warming planet, particularly in the Arctic, where the loss of reflective snow and sea ice would further warm the region. Climate models have consistently pointed to “Arctic amplification” emerging as greenhouse gas concentrations increase.

Well, Arctic amplification is now here in a big way. The Arctic is warming at roughly twice the rate of the globe as a whole. When extreme heat waves like this one strike, it stands out to everyone. Scientists are generally reluctant to say “We told you so,” but the record shows that we did.

The question now on the table is will nations led by fools who continually reject science change their practices in the least? Or are the residents of the planet stuck into a downward spiral, refusing to act – for whatever excuses they adopt – until it is too late to halt our collective demise?