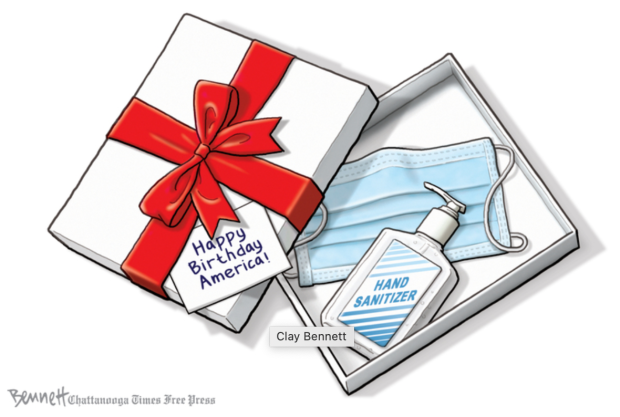 Have to admit it’s nice having a politician sitting in the governor’s mansion with sufficient brains to overcome the sillyass tendencies of most of that breed here in USA, USA.

Regulations based on science, medical expertise, have been in place here in New Mexico since the beginning of this pandemic. A little bit of easing showed up when it looked as if it might be OK – quickly slowed when it became clear that petit bourgeois fools like Trump and his ilk were condemning this nation to hundreds and thousands of unnecessary deaths.

They won’t be prosecuted for murder. They should!

This federal effort is called the “1033 Program.” It’s named after the section of the 1997 National Defense Authorization Act that allows the U.S. Defense Department to give police agencies around the country equipment, including weapons and ammunition, that the military no longer needs.

…Militarization of police doesn’t reduce crime or improve officer safety – but it does make civilians less trusting of the police, with good reason.

In our study, my coauthors and I found that the police agencies who received the most military gear had, in the year after getting the equipment, a rate of civilian killings more than double that of police departments that had received the least amount of military equipment through the 1033 Program. While data limitations limited our analysis to four states, our findings were replicated with nationwide data.

If you own this crap you’re going to use it whether justified or not. Often true of our military. At least as true for our police departments.

Oh, in case you never noticed. Companies looking for more sales of military hardware can afford a lot more lobbying and kickbacks than the folks producing, say, schoolbooks.