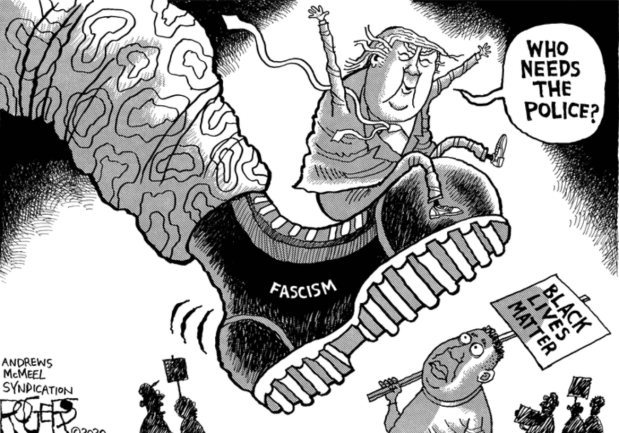 In the middle of Trump’s pandemic, his private Gestapo, his own illegal army of storm troopers, are coming to New Mexico. He says they’re coming to rescue us from the forces of darkness; but, that darkness in today’s world of Republican politics is meant to describe skin color and nothing else.

Uninvited, unannounced – no doubt – they will soon enough roll into Albuquerque to do battle with the citizens of New Mexico’s biggest city. The mayor doesn’t want them. Or him, for that matter. No doubt most of the citizens don’t want them, didn’t ask for them.

There may be a few of the racist fringe that infects all of American politics who will wave flags and cheer. That’s an element of American populist politics that has never relented, never disappeared. I hope the forces of law and order, justice and what is supposed to be the American Way prevail before the murder and abduction, the traditional Nazi “disappearing” of insurgent dissenters takes over control of our largest city.

2 thoughts on “Trump’s Gestapo is coming!”