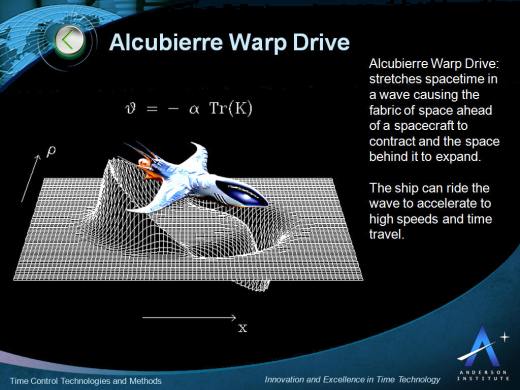 The first scientific theory of warp drive came about in 1994, when theoretical physicist Miguel Alcubierre used Einstein’s theory of General Relativity to develop a framework that would allow faster-than-light travel within the confines of the laws of physics. The key that makes it possible is that, technically, the ship itself doesn’t travel faster than light.

“What warp drive is doing is basically saying that there is no law of physics that says space-time itself can’t go faster than the speed of light,” says Dr Erin Macdonald, astrophysicist and science consultant for Star Trek.

“And so the concept of warp drive is to say, all right, let’s take our ship, let’s build a bubble of space-time around it, and then we’ll have that propel us faster than the speed of light,” she says. It’s similar to the idea of a racecar driving onboard a train: someone standing by the tracks would see the car travelling much faster than its top speed.

All the folks in the article are involved with NASA in the world of then and now, maybe and might be. Trouble is, success or no success is something folks aren’t especially allowed to talk about. Alcubierre did the work illustrated in the article 26 years ago and more. 🙂