The Soup Nazi vs. The Cheeto Fascist https://t.co/gVosKeg3Uk

In the final week of August, the United States saw its biggest deterioration in societal norms and steps toward outright fascism since President Donald Trump came to office four years ago under a mantle of barely veiled authoritarianism. The troubling developments of the past week are almost too many to count.

On Tuesday, 17-year-old Kyle Rittenhouse allegedly crossed state lines with his automatic rifle and murdered two demonstrators at a protest of another horrific police shooting of a Black man. Police did nothing…

It was also the week of the Republican National Convention, which culminated with a grand and illegal presidential acceptance speech with the backdrop of the taxpayer-funded White House decked out in Trump-Pence 2020 propaganda…Congress did nothing…

…The president is enabling and encouraging the formation of armed forces, outside the control of the state, with his uniforms and loyalty only to him. He’s further pushing loyal state forces to either acquiesce to the vigilante demands or outright support them. Amenable law enforcement—from Kenosha to Portland—have proven eager to abide.

As senior Holocaust historian Christopher Browning put it in 2018:

If people do not accept the ground rules by which democracy operates and winning at all costs and incivility become the norm, then things fall apart. … We see that falling apart with political polarization now. And that was true in the 1930s with the rise of authoritarianism and fascism in Europe and elsewhere.

Trump’s call for 12 more years in office is more than Mussolini or Hitler ever publicly asked for…at the beginning of their takeover of democratic governments. If you think he’s kidding around, if you think the least-knowledgeable voters in this Brave New World will come to their senses on their own…I presume you’re spending lots of time, now, on your knees praying for divine intervention. You’ll be spending even longer in the same position, silent and obedient, sometime down the road. 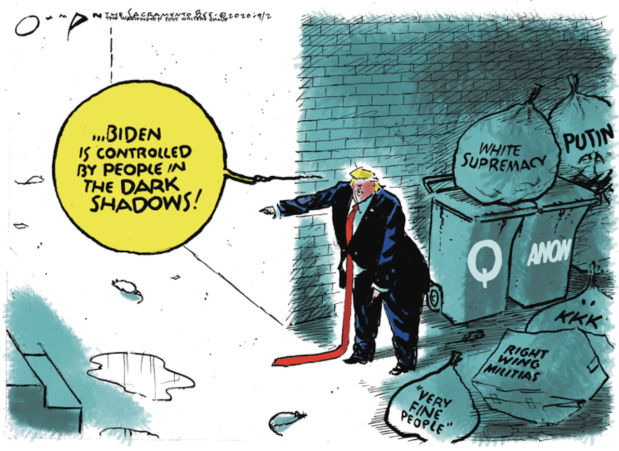