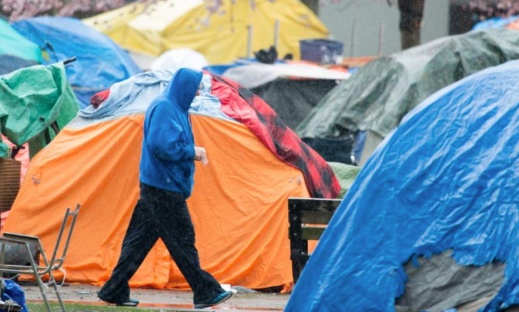 Tent City in Vancouver, BC

You’ve heard this refrain before — giving money to homeless people is not the best way to help them because it might be squandered, or spent on harmful habits. But a new Canadian study makes a powerful case to the contrary…

Researchers gave 50 recently homeless people a lump sum of 7,500 Canadian dollars (nearly $5,700). They followed the cash recipients’ life over 12-18 months and compared their outcomes to that of a control group who didn’t receive the payment.

People who received cash were able to access the food they needed to live faster. Nearly 70% did after one month, and maintained greater food security throughout the year.

The recipients spent more on food, clothing and rent, while there was a 39% decrease in spending on goods like alcohol, cigarettes or drugs.

Have we finally reached a point of understanding by the body politic that embraces charity? Have we found a time when helping folks who are stuck on the way down – to get back up and build better lives?

I made my decisions about 60 years ago. Never looked back. Never had to. Down and out doesn’t mean you can’t move on, move up. Ain’t nothing wrong with giving someone a helping hand.

5 thoughts on “Dollar$ given to homeless. Here are the results…”