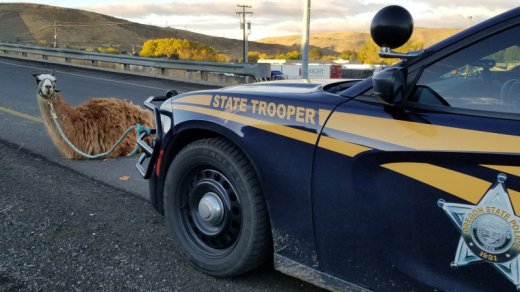 Trooper Levi Macy responded to a call in Eastern Oregon about a wayward llama on a highway onramp…”So, there I was minding my own business when I got a call from OSP Dispatch, telling me that there was a llama, yes a llama, in the road on the I-84 onramp at milepost 304 eastbound. I got there and sure enough a displeased mama llama was laying on the onramp. The owner was taking three llamas from Washington to Utah in the bed of a 1500 Dodge short bed pickup. The truck had a homemade stock rack that didn’t quiet hold the three 🦙 🦙 🦙 (while it took) an uphill corner. Fortunately enough for the llama and myself, the speeds were slow, and traffic was minimal.

“The owner got about a mile down the road before he realized his mama llama was missing out of the back of the truck. But of course, when he stopped his truck, the other two llamas bailed out, running free on the interstate. The owner ran back and gave me the rope to hook to mama llama’s harness. Mama llama refused to get up as you could see by her displeased facial expression … so I told (the owner) that I would llama sit, while he wrangled up the others …”

And so it goes on [what some thought was going to be] a slow day in Eastern Oregon.

One thought on “Mama llama trauma”