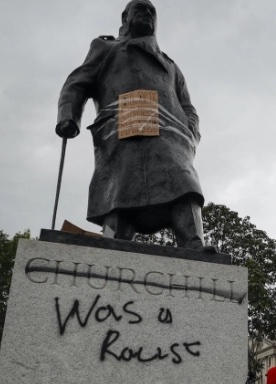 The battle of the statues is now global. Its most recent episode began in Bristol, United Kingdom, where the statue of slave trader Edward Colston was brought down in solidarity with the Black Lives Matter uprising sparked by the police killing of George Floyd in the US. It then quickly spread to the US and the rest of Europe.

In the US, the battle had begun decades earlier over the detested Confederate flag, and is now extended not only to Confederate statues and statues of other racists and white supremacists, but also to military bases named after racist generals of the Confederate army…

In short, it is the entire history of European racism and colonialism with its global consequences that is now on trial. This battle will not stop until this overdue reclaiming and rewriting of world history comes to full fruition.

We rest when and where we can. Then, we resume the fight.

One thought on “Battle of the Statues”