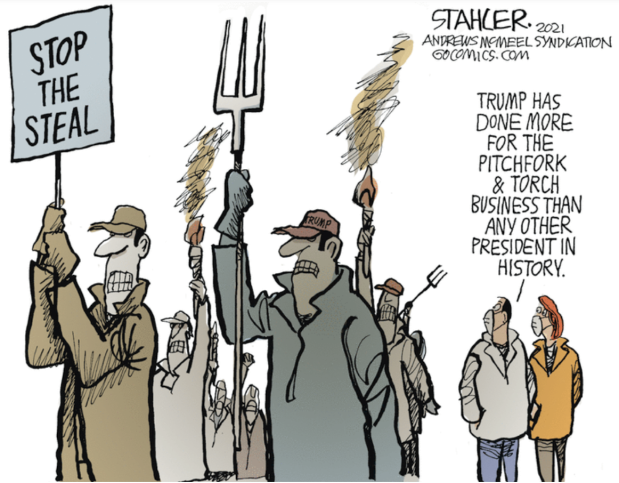 President Trump addressed throngs of supporters at a rally in Washington, DC, on Wednesday, attributing his election loss to “explosions of b——-” and calling on Vice President Mike Pence to do “the right thing,” as Congress was preparing to certify the victory of President-elect Joe Biden.

“We will never concede,” Trump told the cheering crowd. “You don’t concede when there’s theft.

This was followed by a rightwing gang attacking the Capitol, forcing Congress to shut down until police and the National Guard regained control. Even then, Trump soft-pedaled criticism of the most violent of his supporters.

The idjit wing of the Republican Party has no comprehension of Constitutional Democracy. Neither does Trump and his closest allies. Throughout the nation, disgust and contempt for this clown show has resulted in calls for Pence and a majority of the Cabinet to invoke the 25th Amendment to the Constitution and remove Trump from office – right now! Before he can cause even more serious damage to the rule of law.