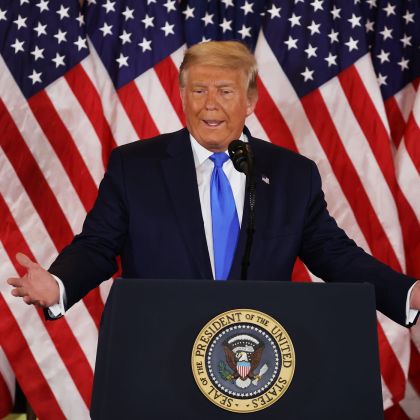 Earlier this month we learned that Donald Trump is expected to bring back his campaign-style rallies this summer, and, like a reboot of a show that no one asked for or wants, few people are thrilled about the development. Democrats obviously are unenthused about the trio of events the guy who tried (and is still trying!) to overturn the election has planned, but apparently some Republicans are equally unhappy about Trump‘s return to the stump.

Politico reports that Republicans in Washington are “dreading” the 45th president’s upcoming rallies, fearful that the new platform—from which he’ll no doubt spew baseless election-fraud conspiracy theories, among other grievances—could derail their chances in the midterm elections, when they’re hoping to take back the Senate and House. “If we win the majority back in 17 months, it’s going to be in spite of Trump—not because of Trump,” one senior House Republican aide, who works for a lawmaker considered to be one of Trump’s top supporters, told Politico. “He will totally take credit if we win the House back—but it won’t be because of him. This guy is a disaster.”

Any victories won, of course, Trumpo will take credit. Even where obvious they are in spite of his presence. But, then, the Republican Party isn’t doing anything in the interim to differentiate themselves from this corrupt disaster. Neither Trump nor his butt-kissers-in-charge of the sinking ship are worth anything to the nation or to what remains of conservative politics outside of the brigade of racists and fools in charge of his party.