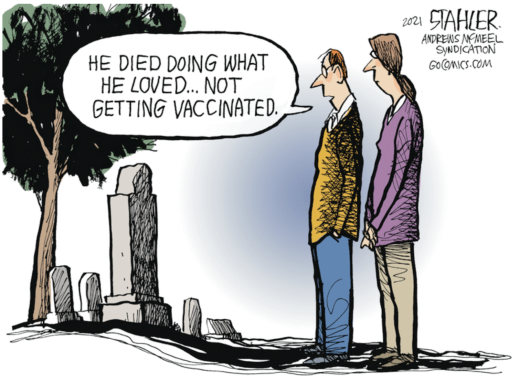 Even when it’s not much different from ignorance…

Woodward and Costa write that Milley, deeply shaken by the assault, ‘was certain that Trump had gone into a serious mental decline in the aftermath of the election, with Trump now all but manic, screaming at officials and constructing his own alternate reality about endless election conspiracies.’…

Milley took extraordinary action, and called a secret meeting in his Pentagon office on January 8 to review the process for military action, including launching nuclear weapons. Speaking to senior military officials in charge of the National Military Command Center, the Pentagon’s war room, Milley instructed them not to take orders from anyone unless he was involved.

“No matter what you are told, you do the procedure. You do the process. And I’m part of that procedure,” Milley told the officers, according to the book. He then went around the room, looked each officer in the eye, and asked them to verbally confirm they understood.

“Got it?” Milley asked, according to the book…”Yes, sir.

‘Milley considered it an oath…’

Remember, a significant number of today’s Republican Party are still ready to vote for this blivet. Conservative or liberal, rightwing or left, please vote for the assured safety of the citizens of this land. Don’t let that loony bugger anywhere near the seat of power, again!

A little more than two years ago, serial tech entrepreneur Ben Lamm reached out to renowned Harvard geneticist George Church. The two met in Boston, at Church’s lab, and that fruitful conversation was the catalyst for the start-up Colossal, which is announcing its existence Monday.

The start-up’s goal is ambitious and a little bit crazy: It aims to create a new type of animal similar to the extinct woolly mammoth by genetically engineering endangered Asian elephants to withstand Arctic temperatures.

It could take as little as six years for Colossal to create a calf, Church told CNBC…“Our goal is in the successful de-extinction of inter-breedable herds of mammoths that we can leverage in the rewilding of the Arctic. And then we want to leverage those technologies for what we’re calling thoughtful, disruptive conservation…” Lamm told CNBC.

…Proving the technology with de-extinction is only the beginning. These same technologies will be able to solve a huge array of human problems,” Richard Garriott told CNBC. “Synthetic biology will allow us to create new life forms that can address massive problems, from oil and plastic cleanup to carbon sequestration and much more. Solving tissue rejection and artificial wombs will go on to help improve and extend life for all humans.”

Cripes! I’d like to live another 80 years or so just to see the products of future genetic engineering coming to fruition.