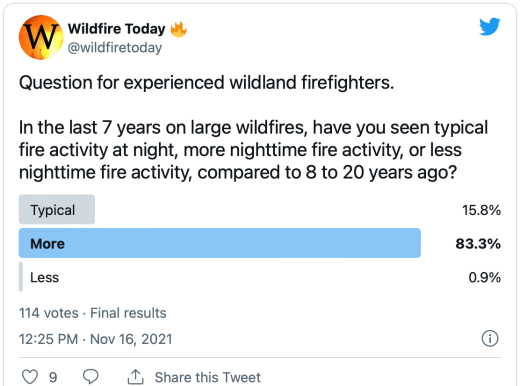 In a study of wildfires in the conterminous United States from 2003 to 2020 researchers found that while fire activity increased during the day in the 18-year period, it increased even more at night.

Heat sensing data from satellites showed significant increasing trends in nighttime wildfire fire activity, with a +54%, +42% and +21% increase in the annual nighttime sum of Fire Radiative Power (FRP), annual nighttime active fire pixel counts, and annual mean nighttime per-pixel values of FRP, respectively, in the latter half of the study period. Activity during the day increased also, with rates of +36%, +31%, and +7% respectively.

But a warming climate with occasional multi-year droughts and higher temperatures can lead to nighttime higher temperatures and lower humidities. Drought will lower the fuel moistures in live and dead vegetation. These changes can result in fuels at night remaining available for significant and continuous fire spread. This is causing wildfires to burn with more intensity, spread more quickly, and have more resistance to control 24 hours a day.

And the poor buggers out there on the fireline are less likely to catch a break, a bite to eat, a bit of rest.

4 thoughts on “Studies confirm that nighttime wildfire activity is increasing”