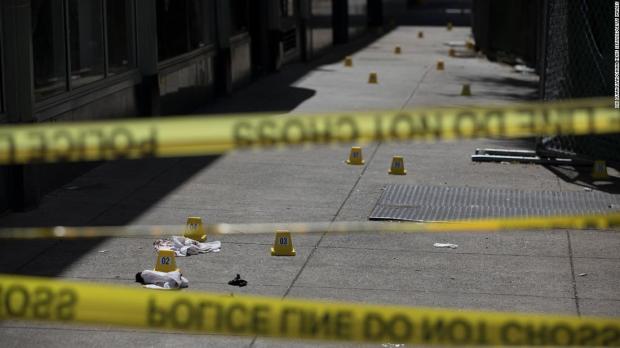 The number of shootings involving automatic weapons in the US has skyrocketed in recent years, suggesting a troubling resurgence in the use of machine guns by criminals, according to an analysis provided exclusively to CNN.

Incidents of machine gun fire have exploded by about 1,400% from 2019 through last year, according to statistics compiled by a gunfire detection company that has acoustic sensors placed in about 130 US cities. Last year alone, ShotSpotter, Inc. detected roughly 5,600 incidents of automatic weapons fire, the analysis showed.

The previously unreported figures add to growing evidence that the widespread availability of inexpensive so-called conversion devices — known as “auto switches” or “auto sears” — capable of transforming semi-automatic weapons into machine guns in a matter of moments are wreaking havoc on American streets.

There has been a corresponding spike in seizures of conversion devices by the Bureau of Alcohol, Tobacco, Firearms and Explosives in recent years, from fewer than 100 in 2017 to more than 1,500 last year…

You might try enforcing gun laws. I realize that’s a simple answer. Truth is often simple.

What is there to say? I not only learned how to do this in the 1950’s…I did so more than once. It was fun. It was exciting. For many of the reasons you might imagine.

The fines were serious. The time in the slammer was serious time. We knew the local coppers could and would bust us…and put us away. We saw it happen to other silly young dudes. More criminal-minded than we ever could be.

That’s all it would take, today, I believe. Enforcing the laws. Further discussion may be needed about why it ain’t so. That isn’t why I posted this. Just saying.