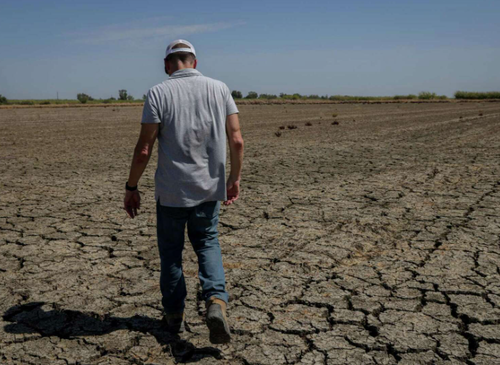 Normally, by September, the drive north from Sacramento on Interstate 5 showcases vast stretches of flooded rice fields on both sides, farms bustling with tractors and workers preparing for fall harvest.

Not this year, said Kurt Richter, a third-generation rice farmer in Colusa, the rice capital of California where the local economy relies heavily on agriculture. “It is now just a wasteland,” he said.

As drought endures for a third year with record-breaking temperatures and diminishing water supplies, more than half of California’s rice fields are estimated to be left barren without harvest — about 300,000 out of the 550,000 or so in reported acres, provisional data from the U.S. Department of Agriculture shows. This year, rice is estimated to account for just 2% of total planted acres across the state…

The dramatic reduction in rice acreage will translate to lost revenue of an estimated $500 million, about 40% of which will be covered by federal crop insurance, according to UC Davis agricultural economist Aaron Smith.

Insurance only covers set amounts. Surviving the death of your livelihood, what may be the last breath of spirit from generations of working families, can drive folks away from everything that has been root and branch of their whole lives.