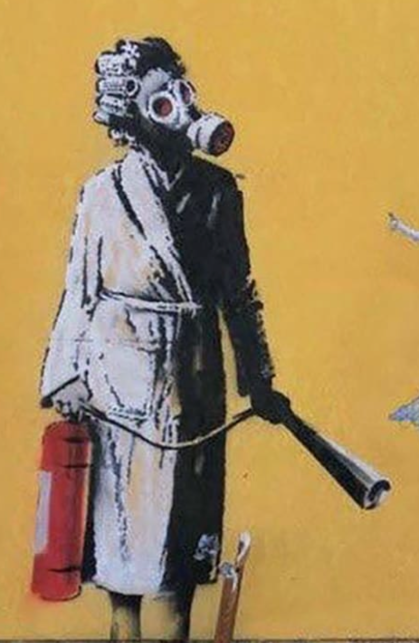 The ringleader of a group that allegedly tried to steal a Banksy mural from a wall in Ukraine could face up to 12 years in prison, the country’s Ministry of Internal Affairs said in a statement Monday.

The suspect, who has not been named, was served a “notice of suspicion” after police detained the alleged thieves attempting to remove the artwork from a house destroyed by Russian shelling in the city of Hostomel last month.

Depicting a woman in a gas mask carrying a fire extinguisher, the mural is one of several works completed by the British street artist in cities across Ukraine, including the capital Kyiv, following Russia’s invasion.

Modern communications let folks know about everything of interest around this silly planet. If you know where to look.

Even the bad guys!

I rarely use this blog time and space to press for bills walking their potential way through Congress. Today’s update newsletter from CFI notes a few bills making progress and I feel they’re worth supporting.

The Respect for Marriage Act (S. 4556) has already passed the House of Representatives and would be awaiting a similar result in the Senate. This Act codifies federal protections for same-sex marriage in the face of considerable religious opposition. That’s why OPP [Office of Consumer Protection from Pseudoscience] supported the bill and called on readers to take action by contacting their Senator earlier this fall.

The Ensuring Access to Abortion Act (H.R. 8297), prohibits state law-based interference with a person’s ability to access out-of-state abortion services. This too passed in the House in July, despite religion-based opposition to reproductive choice.

The Women’s Health Protection Act (H.R. 8296) similarly anchors the right to abortion care in federal law. It has passed in the House and awaits a Senate vote.

The Right to Contraception Act (H.R. 8373) codifies the right to access birth control free from religious or political interference. It passed in the House in July and is up for a Senate vote.

Folks at CFI and many more conscientious and thoughtful individuals of the Progressive persuasion are busy with continued support for these small steps. I hope you will consider doing the same. 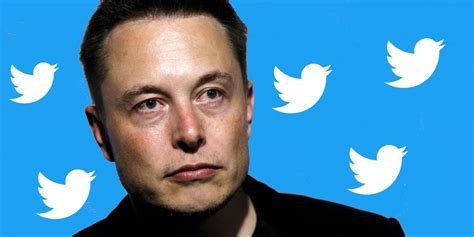 TWITTER began notifying employees affected by a far-reaching round of job cuts, and some learned they’ll be paid for two months. As this was happening, the new owner, Elon Musk, said the business experienced a “massive drop” in revenue as many advertisers withdrew…

Musk plans to eliminate half of Twitter’s workforce to slash costs at the social media platform he acquired for $44 billion last month, people with knowledge of the matter have said. The company must also find ways to cope with interest costs on a massive debt pile…

A coalition called #StopToxicTwitter — made up of more than 60 civil rights groups, including the Anti-Defamation League and Accountable Tech — said on Friday it plans to escalate calls to Twitter advertisers that they stop buying ad space on the platform in the wake of Musk’s sweeping layoffs.

“We are witnessing the real-time destruction of one of the world’s most powerful communication systems,” said Jessica J. González, co-CEO of Free Press, one of the advocacy groups in the coalition. “Elon Musk is an erratic billionaire who’s dangerously unqualified to run Twitter.” Gonzales said the groups were stepping up their campaign in response to Musk’s failure to uphold his commitment to take the measures that would prevent Twitter from becoming a superspreader of racism and disenfranchisement.

Should cops be able to kill people with shotgun-armed robots?…The back-and-forth between the Oakland Police Department and a civilian oversight body concluded with the police relinquishing their push for official language that would have allowed them to kill humans with robots under certain circumstances. It was a concession to the civilian committee, which pushed to bar arming robots with firearms — but a concession only for the time being.

The department said it will continue to pursue lethal options. When asked whether the the Oakland Police Department will continue to advocate for language that would allow killer robots under certain emergency circumstances, Lt. Omar Daza-Quiroz, who represented the department in discussions over the authorized robot use policy, told The Intercept, “Yes, we are looking into that and doing more research at this time.”…

…the Oakland Police Department was saying what nearly every security agency says when it asks the public to trust it with an alarming new power: We’ll only use it in emergencies — but we get to decide what’s an emergency.

They will issue each copper in the robot-led attack squad a reminder card that says, “The shiny ones are the robots!”

U.S. District Court Judge Raymond Dearie, a New York City-based jurist named by a federal judge in Florida to act as a so-called special master in the review of more than 11,000 documents the FBI confiscated, proposed on Thursday that former Magistrate Judge James Orenstein help with the process…

Dearie proposed that the former magistrate, who has a top secret clearance, be paid $500 an hour for work on the Trump documents case. The federal judge who named Dearie as special master, Florida-based Aileen Cannon, has previously ruled that Trump must assume all expenses related to the review.

Someday, someone will write an updated History of American Jurisprudence. This will be the frontispiece.

The governor’s executive order also directs the state Department of Health to marshal state resources to expand access to reproductive health – including abortion – in rural parts of the state and study whether medication that ends pregnancies can be provided in public health clinics.

“This is a state that will stand against any attempts to remove or eviscerate women’s constitutional rights,” Lujan Grisham said during a remote briefing with reporters, legislators and members of the state’s Commission on the Status of Women.

The June order also asserts the state will not comply with abortion-related arrest warrants or extradition requests from other states.

Our Governor Michelle is one tough woman. And as far as I can see, a majority of folks in the state agree with her.