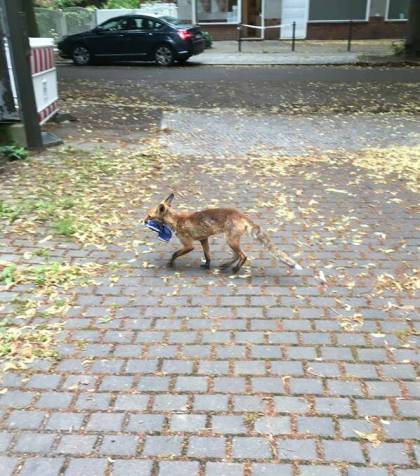 For Christian Meyer, it wasn’t so much about what the fox said but what the fox may have stolen. A resident of the Berlin neighborhood of Zehlendorf, in late July, Meyer made the shocking discovery of 100 pairs of stolen footwear after he had followed a thieving fox to its hideout…

Meyer caught the furry fiend in the midst of stealing a pair of blue flip-flops but was unable to see the investigation through. Then, days later, he spotted the thieving fox again. Meyer followed the animal into the woods, presumably headed toward its hideout.

Dedicated to solving the mystery of the locals’ missing shoes, Meyer followed the fox through the woods where he spent about an hour crawling around the brush in pursuit of the four-legged bandit. Luckily, Meyer’s perseverance paid off: the fox led him to a stash of more than 100 pairs of shoes.

All reasonably clever critters have their own tweaks, I guess. Shoes ain’t one of mine, though.