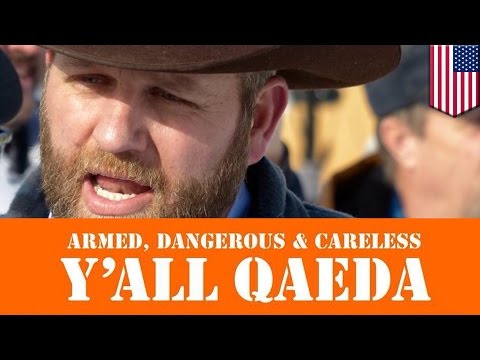 ❝Being one of the guys who’ve taken over the Malheur National Wildlife Refuge in Oregon must suck. It’s so cold that they’ve had to hide under tarps, people have started referring to them as Y’all Qaeda and there’s no snacks.

❝So far, the anti-government militia have been relying on donations — sent through the United States Postal Service — to maintain their siege. While they initially asked for cereal, shower gel, and other essentials, those who aren’t so supportive of their campaign have found some pretty interesting things to send their way.

Some threatened to glitter bomb them, while PETA hand–delivered the ranchers some vegan jerky. But the militia’s organizer, Jon Ritzheimer, seems most annoyed by all the dicks they’ve received.

These dorks think incongruous gift items are a sign of hatred. They don’t get it. Ordinary working folks find these jerks contemptible. Beneath hate.

We go to work every day, We obey the laws of the land. We don’t try to steal from taxpayers. We don’t hold up nature preserves with assault rifles.

Beppe Grillo, the fiery comic whose populist 5-Star Movement stunned Italy by winning a quarter of the votes in February’s election, is facing his biggest test since the vote with rebellion brewing among his novice lawmakers.

Publicly blamed by one of his own senators for the party’s poor showing in local elections earlier this week, in which it won only two towns out of more than 500, Grillo faces the threat of a mutiny that could blow the party apart.

As many as 30 parliamentarians are said to be ready to quit the party for various reasons…Some have balked at being asked to hand back daily parliamentary allowances as part of the movement’s rejection of political privilege.

“What has emerged is his limits as a leader. Any politician knows that managing things in such an absolutist, authoritarian manner is impossible,” said Leonardo Morlino, a professor of political science at LUISS university in Rome.

Grillo’s success was built in equal measure on his own charisma and skill in articulating boiling frustration at a discredited elite, and on widespread public hopes for a new way of doing politics built on youthful energy and the power of the Internet…

His popular blog attracts thousands of comments from young people sick of being shut out of decisions and turned off by a television system divided between Silvio Berlusconi’s Mediaset empire and state broadcasting carved up between the main political parties.

Play-school imitations of dissent always appeal to the disaffected. And achieve little if anything. Now that his tantrums have taken the “movement” past a couple of expressions of independence – his anarchistic bullying is becoming best known as Sound and Fury, signifying nothing. If there’s nothing to be achieved – there’s no reason to follow.

New details are emerging about the four U.S. soldiers accused of plotting to assassinate President Obama and overthrow the U.S. government.

The bizarre story began unfurling on Monday after Pfc. Michael Burnett, dressed in his Army uniform, testified in a southeast Georgia court against his fellow militia members. Prosecutors accused the group F.E.A.R. (Forever Enduring Always Ready) of buying $87,000 worth of assault rifles, bomb materials, and semiautomatic weapons in a plot to bomb a park in nearby Savannah, poison apple orchards in Washington state and blow up a dam with the ultimate goal of overthrowing the government and killing Barack Obama. The group also stands accused of murdering former U.S. soldier Michael Roark and his girlfriend Tiffany York after they learned of the group’s plans.

In a plea bargain, Burnett plead guilty to manslaughter and illegal gang activity on Monday in connection with Roark and York’s murder…

The four U.S. soldiers implicated in the crimes, Pvt. Isaac Aguigui, Sgt. Anthony Peden, Pvt. Christopher Salmon and Burnett, are all active members of the U.S. Army. According to Burnett, the group’s rationale behind killing the president was “to give the government back to the people,” according to CNN….The Associated Press reports that the group courted current and former soldiers “who were in trouble or disillusioned.” Prosecutors said they had no idea of the size of F.E.A.R.’s membership…

The alleged ringleader of F.E.A.R. is Pvt. Aguigui, who funded the militia with $500,000 in insurance and benefit payments from the death of his wife just one year ago. Aguigui called himself “the nicest coldblooded murderer you will ever meet,” according to a video interview with military investigators…

Aguigui as a page at 2008 Republican Convention

…According to Fort Stewart spokesman Kevin Larson, the military has an ongoing probe within the Criminal Investigative Division but no one else is being tied to the crimes at this point, according to Larson. Apparently, Burnett pleaded guilty to manslaughter and agreed to testify against the three other soldiers in order to avoid a death sentence.

The plot ain’t nothing new. A similar plot was uncovered against FDR in the US military in the 1930’s. The storyline worked for a pretty good movie thriller in “Seven Days in May”.

Rightwing nutballs find our military a fruitful hunting ground for the disaffected and unemployable.

Police have said that a 500lb bomb left in a van under the main Belfast to Dublin road near Newry may have been destined for a town centre.

Chief Superintendent Alasdair Robinson said the device, which was stored inside a wheelie bin, was “sophisticated and substantial”. He said that it could have caused huge devastation and loss of life.

The major alert was less than a week since the murder of PSNI constable Ronan Kerr in Omagh, County Tyrone.

Police have refused to be drawn on which organisation was responsible…

Acting NI Policing Board chairman Brian Rea said the “pure purpose” of the bomb was “death and destruction”.

Meanwhile Sinn Fein president Gerry Adams has reiterated his call for dissidents to meet his party for talks. Writing on his blog, he said that republican heartlands were “seething with anger” following the recent murder of Constable Kerr.

“The people of this island demand that you stop,” he wrote, addressing dissident republicans. “I am prepared to meet you anywhere at any time to listen to what you have to say and to tell you that there is now a democratic peaceful way to unite our people and our country on the basis of equality.”

Cynic that I can be – I consider that a possibility still exists that these expressly violent tactics may be a red herring from rightwingers trying to sabotage the peace.

Yes, I’m aware that anarchy is still the road of choice of nutballs either side of the road. Dimwits who care more about the thrill they get from making big noises – instead of actually accomplishing any sort of change.