There can be no single reason or purpose for the creation of venus figures, since the figures came from such disparate groups, across many thousands of years, and in any case with mutually incomprehensible languages.

First and foremost, however, they are not meant to enhance fertility.

RTFA. Please. This was a New Year’s discovery for me. Wandering through the interconnected links is going to take days and weeks. Or more – to give Don’s work the careful appreciation it deserves.

This link won’t get you back to the beginning of his adventure. It’s where you get if you click on the “Don’s Maps” link in his work. Enjoy the journey.

” Photographer Alex Harsley and his 4th Street Photo Gallery, in New York’s East Village, are having their long-overdue moment – one for which Harsley has prepared for decades. Curators and collectors are stopping by; so are TV channels and podcast producers.

” For years, Harsley, 81, sat in the sunbathed storefront of his word-of-mouth wunderkammer. Now you can find him in the back, still nudging the photo and art worlds forward, just as he has done for the past 47 years since he founded the nonprofit gallery that he has single-handedly sustained…

” Draped among the photographer’s prints today are his bellows, analog and digital cameras, each representing an era of photo technology, along with a wooden camera reflecting Harsley’s sense of humour. There are canisters of 777 developer, GE flashcubes and bins of prints to leaf through and purchase. The darkroom now accommodates digital printers…

” His observational, often narrative images straddle without contradiction fine-art and street photography. They capture the lyricism and humanity of urban life, and black urban life in particular – visual love poems in which the threshold between photographer and subject seems to dissolve. He is a master printer. He is also a noted experimental video and multimedia maker who shot the seminal video “Phat Free” for artist David Hammons, capturing him kicking a metal bucket down East Village streets. (The video was the highlight of the 1997 Whitney Biennial.) If Harsley’s photos mirror his heart, his complex videos mirror his “elastic” mind.

I know I was there at least once in the 1970’s. Didn’t meet Alex Harsley…as well as I remember. I remember loving his photos – especially scenes in the city [yes, the Mingus set, as well]. Never lived in New York. Never wanted to. Still, I spent a fair piece of erratic time there from the middle 1950’s on.

I remember his photo of Lewis Michaux’s National Memorial African Bookstore because that was someplace I visited probably every 3rd or 4th trip to The City. A street corner right by that shop was where I first heard Malcolm X all natty dread on a step ladder telling a lot of truth to folks. Standing there with my friend, Daniel, he picked us out, black-and-white, signifying nothing special but what still could be. Even then.

RTFA, Truly enjoyment knowing something that touched me briefly in passing so long ago – stayed around and grew like a tree standing by the water.

❝ A Banksy collector and expert believes a mural that appeared at Extinction Rebellion’s Marble Arch base overnight is an authentic piece by the Bristolian street artist.

❝ John Brandler, who owns a dozen pieces by Banksy is convinced the artwork – which features the slogan “From this moment despair ends and tactics begin” next to a young girl sitting on the ground holding an Extinction Rebellion logo – is an original because of its execution and theme.

Good enough for me. And sock it to the pollution pimps! 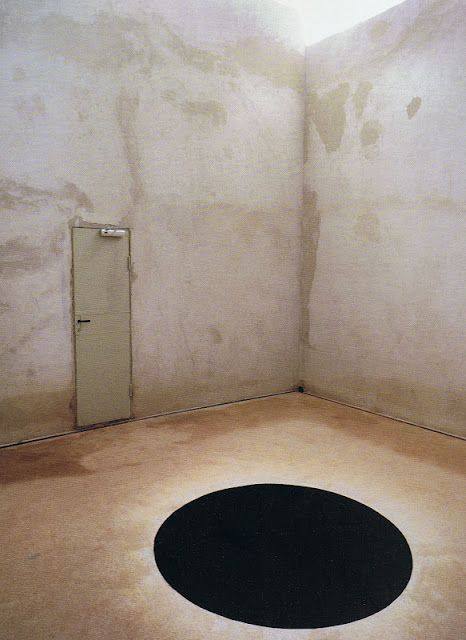 ❝ Art can sometimes play tricks on the mind thanks to optical illusions, although rarely does this kind of art put anyone in real danger…But one art installation did, as a man visiting the Fundação de Serralves Museum of Contemporary Art in Porto, Portugal on Aug. 13 accidentally fell into the work of famed artist Anish Kapoor titled Descent Into Limbo — which features a hole in the ground made to look like a mere spot on the floor.

❝ The visitor — reportedly an Italian man in his 60s — allegedly wanted to see if the void was indeed just that and subsequently fell about eight feet to the bottom of the installation. To the illusion’s credit, there were multiple caution signs set up around the piece as well as a guard tasked with keeping visitors away from the hole…

❝ Kapoor won the exclusive rights to the world’s darkest material in 2016, as according to the company, Vantablack “requires specialist application to achieve its aesthetic effect… the coating’s performance beyond the visible spectrum results in it being classified as a dual-use material that is subject to UK Export Control…”

By using Vantablack for Descent Into Limbo, Kapoor was able to completely eliminate any visible depth in the piece. No curves nor contours are visible — all the eye sees is nothingness.

Draw whatever conclusions you may – political or otherwise – about the usefulness of this substance. Way cool!

❝ Sir Jonathan Ive, Chief Design Officer of Apple, Inc., is sitting across from me at a seamless white oak table. We’ve met a few times before, and I know he cares about watches. He must, right? But I’ve never actually asked him. So I do. And thank God, he does – he recounts a tale of buying an Omega Speedmaster Professional in the early ’90s. I exhale, because the hypothesis of this interview, at least in my mind (likely not in Apple’s), is that the watch industry and its all-too-vocal supporters have got it all wrong. Jony, the creator of what is, by at least one definition, the number one watch on Earth, is a friend, not a foe. But, like any great question of power and influence, it’s not so simple.

Read the article through from the beginning. I’ve always found Jony Ive fascinating. I’ve been fortunate enough to know, casually or well and deeply, a fair number of creative talents in my journey through this life of mine. So, no surprises. But, the eloquence of curiosity, perception coupled with high standards, makes this an interesting read. One worth reflecting upon. And reading, again.

Thanks, Om Malik – no surprise finding a great read via Om’s blog

Soft City, by the Norwegian graphic artist Hariton Pushwagner, is something of a miracle. Not only for existing in the first place, but for surviving at all. It languished in obscurity for decades and was very nearly lost before finally being issued in book form, following a messy legal dispute involving the artist and his former dealer. Most pointedly, however, it is a miracle of its native medium — the comic strip — for its startling and disquieting vision in a form that had never seen anything like it.

Cue the theme from Twilight Zone. Read on.

❝ Pakistani-American artist Anila Quayyum Agha uses light and cast shadow to transform Rice Gallery into a sacred space of her own making that is open to all.

❝ “Intersections” is inspired by Agha’s seminal experience of exclusion as a woman from Mosques, a space of community and creativity, while growing up in Pakistan. The wooden frieze emulates a pattern from the Alhambra, a palace where Islamic and Western discourses met and co-existed in harmony, and serves as a metaphor of union.

An art form I actually have some experience with. Never on this scale. Beautiful.

❝Diego Cusano, an artist in Modena, Italy, combines real objects with doodles to create surreal forms. In this one, he shows the birth of a morning. It cannot begin without coffee. And, for some of us, it has to continue that way through the day.