Though I must point out to Steve Benson – if he ever notices I’m posting one of his cartoons – I’m older than either of these guys. My personal politics are a tad to the Left of both. Have been since the first time I got together with a bunch of folks from SNCC to join the sit-ins at lunch counters I’d never recommend to anyone, anyway.

And I still understand that getting that lowlife scumbag out of the White House remains the highest priority. 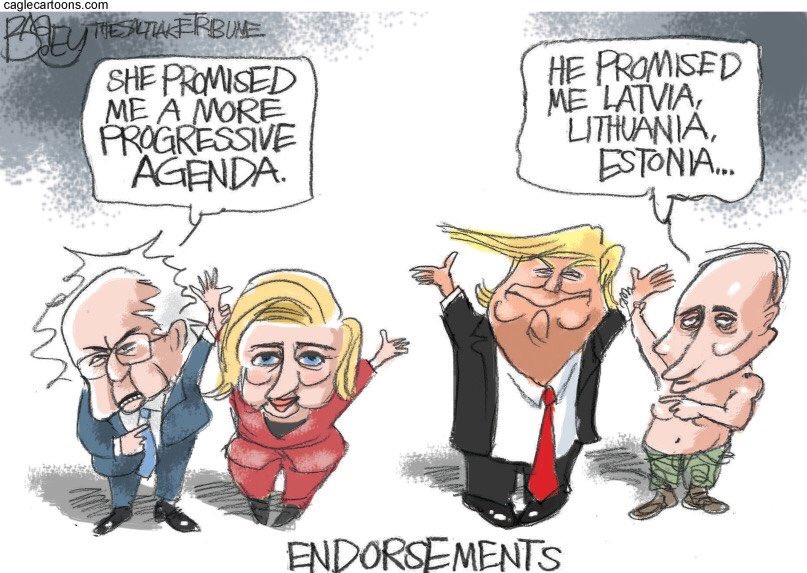 While I haven’t an overwhelming feeling of confidence in American voters – after all, they elected both Reagan and Bush the Little twice – I have a lot more hope for good sense in Bernie supporters.

My extended family are Bernie supporters for many different reasons. They all understand we still need a functioning Constitution, at least an opportunity to push the Tea Party fools and populists out of Congress.

If you understand how the Republican wing on Wall Street damned near crushed the world economy with Bush in office, you ain’t seen nothing if Trump and his 19th Century band of brigands gets to be in charge.

❝ Hillary Clinton is her party’s presumptive nominee. Whether Sanders drops out tomorrow or the day he loses the roll-call vote at the Democratic convention in Philadelphia, his campaign is over.

But if ever there were a losing campaign that achieved some major wins, it’s Sanders’. Not only did he force Clinton to talk more about economic inequality, he pushed her to promise stronger action to fight climate change and rein in fossil fuel companies. If Hillary Clinton becomes president and keeps some of her more recent promises to restrict oil drilling and fracking, Sanders will deserve a share of the credit.

❝ When Sanders first got into the race, it didn’t look like he would adopt climate change as a major issue…Then, gradually, Sanders started to focus on the issue and develop a strong climate agenda….By January, the Sanders campaign was using the climate issue to attack Clinton, going after her for the vague and incomplete nature of her climate plan. The two campaigns battled on Twitter over whose climate and clean energy platform was stronger. Clinton clearly felt the need to start competing with Sanders for the votes of climate hawks.

The one-two punch of pressure from the green grassroots and pressure from Sanders pushed Clinton leftward on a number of energy issues.

❝ First, last fall, Clinton finally came out against the Keystone XL pipeline, shortly before Obama rejected it. She also declared that she was opposed to offshore drilling in the Arctic Ocean. And she shifted her position on fossil fuel extraction on public land, from saying it was necessary to saying she wanted to move toward an eventual ban.

As Sanders picked up steam, she gave still more ground to climate activists. In February, she voiced her opposition to offshore drilling in the Atlantic. She also moved to assuage concerns that she is pro-fracking, saying in a March debate that she wants more regulation of fracking, and that she opposes the practice in instances when the local community is against it, it causes air or water contamination, or it involves the use of secret chemicals…

❝ Last month, in recognition of Sanders’ strong showing in the primaries, the Democratic National Committee allowed him to appoint five members to the party’s Platform Drafting Committee, while Clinton got to appoint six. Among Sanders’ choices was Bill McKibben, the climate activist who founded 350.org, led the charge to block Keystone XL, and calls for dramatically reduced fossil fuel extraction…

❝ As Sanders said at a Monday night rally in San Francisco, “When we began our campaign, our ideas were considered a fringe campaign and fringe ideas. That is not the case today.” Sanders lost the primary race, but he has changed the Democratic Party and the politics of climate change.

The next part is the hardest. The part ofter the election.

Yes, I’m worried about American voters and how gullible they may be. After all, our country elected and re-elected both Reagan and George W. Bush. Still, my cynicism is countered by a reasonable quantity of optimism. There really is enough of an army of both smart citizens and smartass politicos to hope that reason prevails.

The hard part is going to be resisting the impulse to press the Democrat Establishment into honoring progressive promises made before and during the campaign. Uh-uh. Their reaction will be immediate and regressive. The Left will be shut out like someone with OCCUPY WALL STREET tattooed on their forehead – at an ExxonMobil shareholders’ meeting.

Not that I’m confident about staying within the Democrat Party long-range, anyway. Just saying, give ’em that first hundred days that impresses the mainstream media before pressing the integrity button to see what happens. There are smart folks in Bernie’s campaign right now who are calculating the when and how to initiate a grassroots 3rd Party campaign. They have beaucoup programmatic tasks and they can be revised to include an independent party if needed. There are lots of variables in those calculations and no need to hurry the process.

Chief justice John Roberts has come to the rescue of Barack Obama’s healthcare reforms for a second time as the US supreme court struck down a Republican-led challenge to Obamacare that could have gutted the legislation and stripped millions of Americans of their health insurance.

Rescue? No. Roberts may be a conservative dork; but, his style of judgement rests on the intent of Congress and law. Passed by a Congress lightyears ahead of what we’ve had to bear since Year 3 of Obama, the intent of the ACA was clear and Roberts supported the law – as far as Congress went.

The decision in the high-stakes case of King v Burwell all but guarantees that Obamacare will survive intact until at least the 2016 election, giving its supporters hope that it will become impossible to reverse even if a Republican is elected to the White House.

The case, which turned on the meaning of four words – “established by the state” – was brought by Virginia limousine driver David King, who sued the then health secretary, Sylvia Burwell, on the grounds that insurance subsidies erroneously paid to those on low to middle incomes forced him to take out cover against his will by pushing him above an affordability threshold…

In most respects, the same as laws establishing minimum levels of automobile insurance. Opposed just as vehemently in its day by cheapskate conservatives who hate paying for anything.

But six of the nine justices, including Roberts, sided with the government in agreeing that other parts of the legislation made the broader meaning clear and allowed subsidies to be paid to exchanges run by states or the federal government.

“Given that the text is ambiguous, we must turn to the broader structure of the act to determine the meaning,” wrote Roberts in a passage that represents a huge victory for the Obama administration…

Democratic frontrunner Hillary Clinton…praised the court’s decision, tweeting: “SCOTUS affirms what we know is true in our hearts & under the law: Health insurance should be affordable & available to all.”

Fellow presidential candidate and leftwing Vermont senator Bernie Sanders praised the court for recognizing “the common-sense reading of the Affordable Care Act” but went on to call for replacing Obamacare with a “Medicare-for-all, single-payer system”.

If and when we get a Congress that not only fights for the needs of average Americans; but, has the courage to provide a bit of leadership – we’ll get round to Bernie’s proposal. Only a bit over a half-century after the rest of the industrial West did so.

Which prompts me to note why I – as someone who has nothing more than contempt for the 2-party/electoral college bordello our politics are chained to – still suggest voting for Democrats when there isn’t a progressive 3rd-Party alternative. If we leave a mediocrity to fall into the hands of truly corrupt class-worshippers, we’re really in line to be screwed. And we will be getting what we deserve for our inaction.

Bernard L. Madoff said he never thought the collapse of his Ponzi scheme would cause the sort of destruction that has befallen his family. In his first interview for publication since his arrest in December 2008, Mr. Madoff — looking noticeably thinner and rumpled in khaki prison garb — maintained that family members knew nothing about his crimes.

But during a private two-hour interview in a visitor room here on Tuesday, and in earlier e-mail exchanges, he asserted that unidentified banks and hedge funds were somehow “complicit” in his elaborate fraud, an about-face from earlier claims that he was the only person involved…

In many ways, however, Mr. Madoff seemed unchanged. He spoke with great intensity and fluency about his dealings with various banks and hedge funds, pointing to their “willful blindness” and their failure to examine discrepancies between his regulatory filings and other information available to them.

“They had to know,” Mr. Madoff said. “But the attitude was sort of, ‘If you’re doing something wrong, we don’t want to know.’ ”

While he acknowledged his guilt in the interview and said nothing could excuse his crimes, he focused his comments laserlike on the big investors and giant institutions he dealt with, not on the financial pain he caused thousands of his more modest investors. In an e-mail written on Jan. 13, he observed that many long-term clients made more in legitimate profits from him in the years before the fraud than they could have elsewhere. “I would have loved for them to not lose anything, but that was a risk they were well aware of by investing in the market,” he wrote.

Mr. Madoff said he was startled to learn about some of the e-mails and messages raising doubts about his results — now emerging in lawsuits — that bankers were passing around before his scheme collapsed.

“I’m reading more now about how suspicious they were than I ever realized at the time,” he said with a faint smile.

He did not assert that any specific bank or fund knew about or was an accomplice in his Ponzi scheme, which lasted at least 16 years and consumed about $20 billion in lost cash and almost $65 billion in paper wealth. Rather, he cited a failure to conduct normal scrutiny.

RTFA. Long and detailed, confirming – if I may say – my cynical suspicions about the biggest banks, lending and financial institutions. It all fits in with what I observed on financial streets before the crash that resulted in the Great Recession. Everyone knew what was going on – except the little guys who either believed the checks and balances built into regulation were being observed – or the other little guys suckered in by the Free Market ideological crap that helped Republicans and Blue Dog Democrats deregulate the markets and remove oversight.

Interesting personal stuff in the article. If you’re interested in how criminals think. It can’t be much different from, say, a Bush or Rumsfeld autobiography except that Madoff probably isn’t as committed to self-deception and political deceit.