Hospital charged $39.35 to let her hold her newborn child

Thanks to Ninja Economics

And here’s a link to the article at VOX.

When it comes to offering Wi-Fi in the sky, airlines enjoy a situational monopoly. Still, this takes the cake: a Singapore Airlines passenger stepped off a plane, looked at his phone and discovered this bill for $1,171.46:

As the passenger, Jeremy Gutsche, explains on TrendHunter, the eye-popping total came about as result of ordinary internet use — sending emails, uploading documents and such things. But since the airline’s $28.99 sign-on fee only included a paltry 30 MB of data, the overage charges hit hard.

“I wish I could blame an addiction to Netflix or some intellectual documentary that made me $1200 smarter. However, the Singapore Airlines internet was painfully slow, so videos would be impossible and that means I didn’t get any smarter… except about how to charge a lot of money for stuff. I did learn that,” noted Gutsche…

Meanwhile, the airlines are locked into long-term exclusive contracts with Wi-Fi providers like Gogo, which appears to have settled a recent price-gouging suit but has failed to bring down prices. The hope of future competition doesn’t look great either, as AT&T this week said it would ground plans to build in-flight Wi-Fi.

The article ends with a CYA explanation about startup costs for airplane wifi services. Scant help to consumers who have been shafted.

And a lousy business model – apparently acceptable to some providers.

So, a word of caution. Check what’s included in what you sign up for. You know from the gitgo that airlines aren’t in the business of providing anything at a reasonable cost. They will screw you a bit more for some services than others. 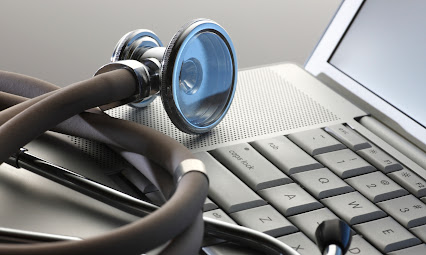 More than half of U.S. hospitals were on the hook to meet a new set of “meaningful use” of electronic health records criteria — known as the stage 2 criteria — by the end of the fiscal year that ended in July. The new study’s data, which was gathered in late 2013, suggests that many may have missed the milestone. At the time, only 5.8 percent of those hospitals were on track to adopt all 16 of the stage 2 meaningful use goals.

The criteria are the second tier of compliance with the 2009 Health Information Technology for Economic and Clinical Health Act, also known as HITECH. The act requires hospitals to move from paper to electronic recordkeeping. At first, only a basic set of criteria is required, but once a hospital starts down the path, it must meet higher benchmarks at scheduled dates. The more than half of hospitals that were scheduled to meet the stage 2 meaningful use criteria in 2014 were the first wave to begin adopting digital medical records.

The study determined that the number of hospitals adopting electronic health records continues to rise steeply. Nearly 60 percent of hospitals now have at least a basic system. And 90 percent of those were on track to achieve many of the 16 core criteria.

The study suggests that, where hospitals are not able to meet criteria, they aren’t always to blame. Vendors must upgrade their products to make necessary functions available to meet the criteria. These challenges, however, appear to be concentrated in specific types of hospitals.

“Policymakers may want to consider new targeted strategies to ensure that all hospitals move toward meaningful use of electronic health records,” Adler-Milstein said. “We found that rural and small hospitals lag behind, suggesting a need to expand federal efforts to help these institutions select, purchase, implement and successfully use electronic health records in ways that earn them incentive payments and enable them to engage in new care delivery and payment models.”

Overdue. Way overdue. One of the best things we can thank Obama for – at two levels.

I really enjoy being able to access my medical records, diagnoses and communications – and love seeing them available between my physicians. Two of the four physicians on my Medicare chart are there: my GP and my eye doctor. Mostly just annual checkups; but, I’m glad they can see other’s work. The other two have just as perfunctory a relationship – and I’m confident they’ll soon be on board.

The best reason in the world to get hospitals into the mix makes me feel great – as a cynical geek. Because computational analysis is turning up crooked hospitals, administrators and healthcare conglomerates all over the country. And I love it.

Two sisters wanted in a $9.1-million Medicare fraud investigation into their Dearborn clinic have been arrested in South America and will be returned to Detroit to face charges…

Clara Guilarte, 56, and Caridad Guilarte, 54, missing since February 2007, were on a federal most-wanted list for Medicare fraud. They were apprehended Sunday as they tried to get on a plane in Colombia, said Kathleen Sebelius, secretary of the U.S. Department of Health and Human Services.

Tom Spokaeski, an investigator with the federal fraud task force in Detroit, said the sisters were arrested after tipsters called a national Medicare fraud hotline.

They are charged with committing fraud at the Dearborn Medical and Rehabilitation Center, a drug infusion clinic they opened that served people with AIDS and HIV, hepatitis C and other chronic conditions…

Clara and Caridad Guilarte, who had been involved in questionable clinic activities in Miami, came to Detroit in 2005 to flee the heightened federal scrutiny there, federal court records show.

They filled out a simple form to establish a Michigan corporation — paperwork that essentially requires little beyond the name of the registered agent for the company — found a doctor who was certified to bill Medicare and opened the Dearborn Medical and Rehabilitation Center.

Like the ones the sisters were associated with in Miami, the Dearborn facility was a drug infusion clinic for people with AIDS, hepatitis C and other health conditions. They are charged with $9.1 million in fraudulent Medicare billings.

HHS is ramping up internal methods – also available to states and regional bodies – to spot and track suspicious billing patterns. IMHO, one of the best tools to rely upon is nosy old farts like me who just might spot a fraud in progress. That’s what happened in this case.

Will electric car charging networks have the type of roaming commonly found between cell phone providers? If Nokia Siemens Networks — a joint venture between the European networking giants — has anything to say about it, in Europe they will. This week at Mobile World Congress, an annual telecom conference in Barcelona, Spain, Nokia Siemens Networks and a German public utility group called Smartlab announced they are developing an authentication and authorization service to enable electric vehicle drivers to “roam” when charging up via various service providers.

Called e-clearing.net, the service will essentially authenticate your data across charging infrastructure, using information like your EV charging contract ID, an RFID card number, a PIN number or a telephone number. The group notes that the service is built to be secure, and says in the future, electric charging service providers can use e-clearing.net to make customer billing easier…

The group’s new e-roaming project highlights just how nascent the electric vehicle industry is. While there are some early standards in place for charging, the IT layer for the data involved with charging isn’t yet standardized…Nokia Siemens Network’s involvement also shows how the telecom sector is increasingly looking to work on using their networks for the “Internet of things,” including EVs and smart meters….

Katie takes the time to reinforce her belief that Open Source is needed to advance the tech. I’m not at all convinced of that. But, I hadn’t considered this solution to roaming with an electric car.

Seems to me just as simple to utilize one of several existing means of payment – from swiping your credit card to waving your cellphone as a magic wand. The payment needn’t be tethered to the vehicle; but, to whoever is paying for the parking.

I can conceive of a salesman out for dinner with a client falling over himself to pick up the tab for charging the client’s car.