[The only one who isn’t boring is Bernie!]

An Australian county called Bland hopes to link up with Dull in Perthshire and the tiny Scottish village’s official US twin, Boring in Oregon – in an attempt to create a triumvirate of tedium called Dull, Boring and Bland.

Even though residents of Bland in New South Wales are fed up with people ridiculing them, they want to cash in on humorous publicity by joining with the pair…

It was named after William Bland, whose life was anything but. The London-born son of an obstetrician was transported as a convict to Van Diemen’s Land in 1814 after killing a sailor in a duel in Bombay.

He was later pardoned, became a pillar of colonial life and founded the Australian Medical Association.

There must be a few extra jots of humor in a doctor’s association founded by someone convicted of manslaughter. 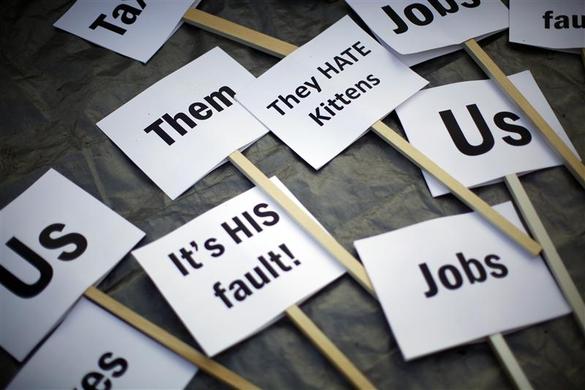 Signs are seen at the “Occupy” camp in Manchester, New Hampshire

Says it all, doesn’t it?

The next time you are caught doodling in a meeting, declare that you are simply trying to boost your concentration.

Rather than being frowned upon, doodling should be actively encouraged in meetings because it improves our ability to pay attention, a British psychologist claims.

“A simple task like doodling may be sufficient to stop daydreaming without affecting performance on the main task,” she said. “In everyday life, doodling may be something we do because it helps to keep us on track with a boring task, rather than being an unnecessary distraction that we should try to resist doing.”

The day after Christmas
Daylife/Reuters Pictures

Well, here’s something that’ll cheer you up. Let’s start planning Christmas 2009! Oh, why the sour face? Lots of people have it all boxed off already by now and some aren’t even mentally ill.

Let’s see. Bookings are already being taken for festive Pontin’s breaks next December. Isn’t that wonderful? Prices start at £124 per apartment, and you’re assured that, “The party never ends, with tinsel, balloons, party games and laughter, and a fantastic festive dinner with turkey and all the trimmings.” But hurry! You must book by February ’09 or prices will go up.

What do you mean, you’d rather deep-fat fry your own hair? All right, what about this offer: Christmas ’09 in Kissimmee, Florida, at a Best Western Hotel, from £569? No? Well, how about taking over an entire pub in Cumbria for £1,500? Apparently, it will be “a truly unique Christmas present for your friends and family”.

Yes, I know. It’s sick, isn’t it? The very idea of thinking about next Christmas when this year’s sprouts are still passing through the digestive system not only tempts fate but is grotesque. Yet plenty do. Which is why, as we speak, there are people out buying reduced wrapping paper, slightly damaged cards, cut-price shirt-and-tie sets, just so that they can say smugly, around next August, “Oh. We’ve had Christmas done and dusted since last December.”

You could waste energy fantasising about beating such people to a pulpy mass, but why bother? Probably best just to accept that Christmas now lasts for the best part of 12 months. January, of course, is taken up with sales and saying how glad we are that Christmas is all over…

I’ll race you to the basement!

Let oil soar above $140 a barrel. Let layoffs and foreclosures proliferate like California’s fires. Let someone else worry about the stock market’s steepest June drop since the Great Depression. In our political culture, only one question mattered: What was Wesley Clark saying about John McCain and how loudly would every politician and bloviator in the land react..?

Unable to take another minute of this din, I did what any sensible person might do and fled to the movies. More specifically, to an animated movie in the middle of a weekday afternoon. What escape could be more complete..?

Indeed, sitting among rapt children mostly under 12, I felt as if I’d stepped through a looking glass. This movie seemed more realistically in touch with what troubles America this year than either the substance or the players of the political food fight beyond the multiplex’s walls.
END_OF_DOCUMENT_TOKEN_TO_BE_REPLACED