Not much thought goes into what the kiddies should learn either, eh? 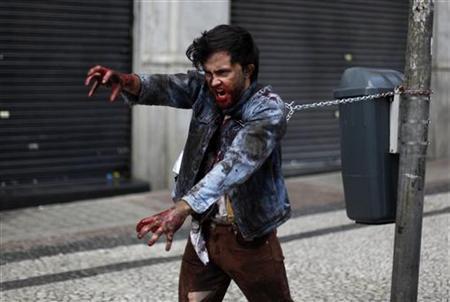 Natural and man-made obstacles studded the course of a Philippine race, but the real danger to the thousands of runners came from the hordes of “zombies”. About five thousand people dashed along the five km course of the survival-themed race in Laguna Province, about 38 km south of Manila, dodging an assortment of the walking undead in the contest based on a popular U.S. race.

Two hundred actors dressed as post-apocalyptic zombies hid behind trees, bushes and rocky uphill climbs along the five km course to surprise the unsuspecting runners and symbolically feast on their brains by stealing flags attached to the runners’ waists.

Once all three flags were stolen, runners were “dead.” But they could gain additional flags by carrying out optional tasks that often involved zombies guarding the various prizes.

Organizers said the races helped both amateur and professional runners stay focused without the boredom that can kill some runs.

“We like watching zombie shows and it really tickles our imagination,” said Angelo Cruz, organizer of Outbreak Manila, which seeks to promote fitness through the races and plans to hold similar events in the coming months.

“Right now, to have it in reality, it’s making everyone’s summer – I hope…”

At the end, runners were awarded prizes for their struggle and tried to express their feelings about surviving a global zombie takeover and what might be needed.

“The well-trained surely have higher endurance,” said Rodson Santos, a university student who wore a robot costume as his way of surviving the zombie hordes. “If you can outrun the zombies, then you’ll probably survive. But if you’re just a regular person without any exercise, chances are you will be easily caught.”

Researchers at Centre for Ecological Research and Forestry Applications…shed new light on the evolution of brain size in birds. Scientists have known for some time that migratory birds have smaller brains than their resident relatives. Now a new study looks into the reasons and concludes that the act of migrating leads to a reduced brain size…

Understanding brain evolution is something that has interested scientists since the times of Charles Darwin, who considered that the large size of a human brain went hand in hand with the exceptional cognitive capacities of our species. One of the classic explanations is the protective brain theory, which suggests that a large brain — in comparison to body size — makes learning easier. This protects individuals from changes in the environment, such as those produced by changes in season. In the case of birds however not all species respond to seasonal changes in the same way. Migratory birds avoid these changes by travelling to less inhospitable places when conditions worsen. This is the strategy followed by swallows or cuckoos. Resident bird species stay in the same area throughout the year and face strong environmental fluctuations. Tits and crows belong to this group…

The study…points to the fact that being a migratory bird is what makes these birds have smaller brains. Researchers came to this conclusions by reconstructing the evolutionary history of passerine birds and determining the sequence of evolutionary changes which most probably led to the current situation. In the case of this group of birds “the first step was changing from a resident to a migratory life and the second step was a reduction in the size of the brains of migratory birds,” Daniel Sol explains. “Therefore,” he adds, “differences in brain sizes are not caused by nature’s need to provide resident species with larger brains, as suggested in the protective brain theory, but to provide migratory species with smaller brains.”

Normally a larger brain offers many advantages. Then why is it that in the case of migratory birds natural selection has favoured smaller brains? The study highlights various explanations, but the general idea focuses on the possibility that a large brain does not necessarily have to be better. According to Daniel Sol, “the brain is an organ that consumes a lot of energy and develops slowly and this can be too costly for migratory species which must travel far and have little time to reproduce.”

Several interesting ideas in the study. Some of which would be useful to a stand-up comedian.

The rest are meaningful to evolutionary biologists.

Rapid advances in neuroscience could have a dramatic impact on national security and the way in which future wars are fought. In a report commissioned by the Defense Intelligence Agency, leading scientists were asked to examine how a greater understanding of the brain over the next 20 years is likely to drive the development of new medicines and technologies.

They found several areas in which progress could have a profound impact, including behaviour-altering drugs, scanners that can interpret a person’s state of mind and devices capable of boosting senses such as hearing and vision.

On the battlefield, bullets may be replaced with “pharmacological land mines” that release drugs to incapacitate soldiers on contact, while scanners and other electronic devices could be developed to identify suspects from their brain activity and even disrupt their ability to tell lies when questioned, the report says.
END_OF_DOCUMENT_TOKEN_TO_BE_REPLACED