The Cannabis Regulation Act, passed by the Legislature and signed by the governor last year, called for sales of adult-use cannabis to begin no later than April 1. The new industry is projected to generate over $300 million annually in sales, create more than 11,000 jobs and bring in $50 million in state revenue in the first year alone.

Still looking for a low horsepower bread recipe to try for my weekly loaf. I doubt it will become my regular bake; but, I’d still like to give it a try.

…The impossible sounding, high-octane story of a sophisticated smuggling network that used skydiving planes to sneak millions of dollars worth of weed and cash across state borders in the United States from 2010 to 2014. In what was termed one of Colorado’s “largest and most sophisticated criminal enterprises” since medical marijuana was legalised in 2000, a smuggling ring operated from the throngs of the legal weed business in Denver, running an extremely profitable and illegal side-business.

Over the course of four years that the drug trafficking ring was alive, a team of more than 71 individuals operated a highly sophisticated smuggling network that used skydiving planes to sneak 12 million dollars worth of weed and cash across state borders. One of its most intriguing aspects was that it operated smack in the middle of Denver’s most popular and profitable legal weed growing warehouses, its growers posing as medical caregivers to evade regulation and taxation.

Of course, like most highs, it didn’t last too long.

Interesting story. Absurd in a supposedly modern nation that still treats growing and using cannabis as a creation of Satan. Courtesy of our archaic “states rights” it will probably only take another half-century for (almost) all this nation to go legal. Not that Congress is anymore advanced than most local politicians. They just get paid more.

…Now that 10 states and the District of Columbia have legalized recreational marijuana, officials are grappling with projecting collections from a new sin tax. Forecasting revenue from a product that was illegal just a few years ago, and remains so under federal law and in most states, presents a unique challenge for state budget planning. For example, in Nevada’s first six months of collecting marijuana taxes, revenue came in 40 percent higher than budget officials expected, but in neighboring California revenue was 45 percent below projections in the first six months of collecting marijuana taxes.

And with more states considering legalizing marijuana, forecasting and budgeting difficulties for revenue from recreational marijuana taxes are likely to become widespread. These challenges have consequences: If tax collections come in below forecasted amounts, for example, programs that are funded by these dollars could suffer.

The Yellow Brick Road may be paved with nothing more than yellow bricks instead of the gold forecast by libertarian optimism. Don’t spend it before you get it, folks! 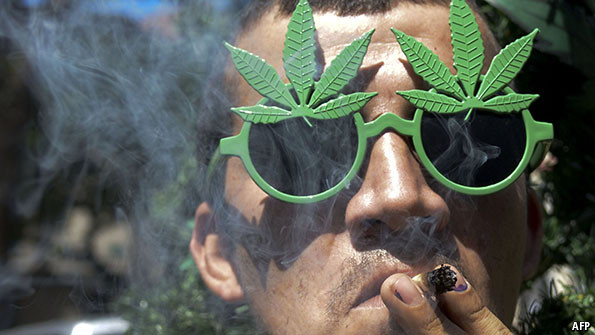 ❝ Happy 4/20, everyone! Now that pot is legal in 33 states and counting, it’s a pretty heady moment for stoner culture. Fans of cannabis can celebrate 4/20 openly and in style in more places than ever before. And even if you’re not in a state that legalized pot, there’s a still a pretty good chance that the cops won’t hassle you as you spend 4/20 doing your thing.

If you’re a white person…

❝ Sorry to bring you down, but that’s the harsh reality. If you love pot AND you’re white, everything is totally awesome these days. In 2017, 81% of cannabis executives were white. Meanwhile, even in states where pot is legal, and even though Black people and white people use pot at similar rates, Black people are still arrested way more often than whites. We love 4/20 and we love legalization, but that’s not OK.

RTFA for facts and ideas. No rest without justice.

❝ “This product offering is in line with our efforts to provide a wider range of accessible health and wellbeing products and services to best meet the needs and preferences of our customers,” Walgreens spokesman Brian Faith said in an email to CNBC.

Rival drugstore chain CVS introduced CBD-containing topicals, including creams and salves, to stores in eight states earlier in March. As the non-psychoactive cannabis compound becomes one of the hottest ingredients in consumer products, retailers are carefully evaluating the market.

I have an irksome albeit minor idiopathic quirk which has responded to combinations of CBD and cannabis via inhalation therapy. According to some early studies. Worth waiting around to try [1] if legal beagles decide it fits into Medicare and [2] inhalation therapy means the hospital flavor – not smoking the stuff. I quit smoking about 60 years ago. Ain’t about to resume.

If Alice B. Toklas brownies work – I’m in!

Kamala Harris, asked whether she had ever smoked pot: ‘Half my family’s from Jamaica. Are you kidding me?’

❝ Among 2020 candidates, marijuana legalisation is a mainstream issue. Among Democrats, nearly all have expressed at least some degree of support. Even Donald Trump’s lone Republican challenger, the former Massachusetts governor Bill Weld, supports it. Advocates are optimistic that the 2020 election could help bring an end to the federal prohibition of the drug.

“The support for marijuana legalisation has quickly become a litmus test in the 2020 Democratic primary,” said Erik Altieri, executive director of the National Organization for the Reform of Marijuana Laws (Norml). “With the upcoming primary, it is also clear that support for prohibition is ultimately disqualifying with the Democratic electorate – and with the American electorate generally.”

If you aren’t supporting legalization – for purportedly moral reasons, some particular religious fetish, political dementia which has your brain locked into, say, the 16th Century – then, you might be missing the simple economics of “sin taxes” derived from social use of cannabis just as they are realized from beer and the hard stuff.

States generally include a proviso to spend all or most of those funds on something beneficial like education. Again, another issue which American conservatives seem honor bound to ignore. Hopefully, voters will learn to ignore stupidity as thoroughly as they’re starting to reject incompetence.