The Texas grid failure that’s left millions struggling without power in freezing conditions has ignited a feud between Democrats and the GOP over Republicans’ decades-long oversight of the energy industry and prompted calls for a system more resilient to extreme weather conditions.

Texas has avoided federal regulation by establishing its own power grid that’s nearly cut off from the rest of the country — an isolated system that conservatives in power have long praised.

But the system collapsed this week from a surge in energy demand coupled with frozen utility plants during a brutal winter storm, which then increased energy prices and triggered the state’s worst blackouts in decades…

“So much of this was avoidable,” O’Rourke said this week on an interview with MSNBC. “Going back to the deregulation of our electricity grid in Texas, which has created an incentive to actually not weatherize or protect against these events.”

“The energy capital of North America cannot provide enough energy to warm and power people’s homes,” O’Rourke continued. “We are nearing a failed state in Texas. And it has nothing to do with God or natural disasters. It has everything to do with those in positions of public trust who have failed us.”

Texas worked harder than any other state to substitute Republican slogans for technology, science or good sense. The citizens of Texas suffered the logical result of ignorant partisan politics.

Republican party hacks deserve to be thrown out of office for acting like obedient pawns in the game of economic life. 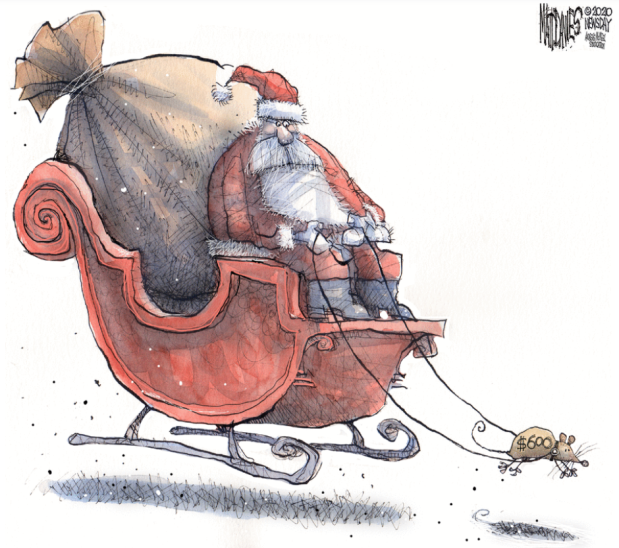 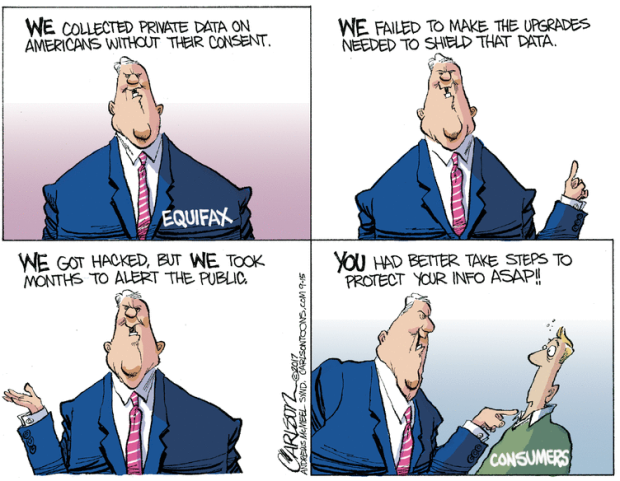 Earlier this week, the Bureau of Labor Statistics showed that one of the odder trends in American business is continuing — job openings are growing much faster than hires.

Here’s a chart showing the rapid rise in job openings and the much more modest rise in hires:

People sometimes see this as a sign of “structural problems” in the economy. But pair it with the continued weakness in wage growth and it looks to me more like stinginess. Business would like to add staff to their teams, but don’t want to offer the higher pay that would be needed to attract candidates they want to hire.

You already know the Republican response to this state of affairs – cut unemployment insurance compensation, duration and any other kind of welfare benefits. Force folks to take whatever job is available no matter crappy pay or working conditions.

Welcome to 21st Century conservatism. Yup. Same as the 19 Century. The enlightenment characteristic of folks like Teddy Roosevelt or even Everett Dirksen has evaporated in the heat of greed and privilege. 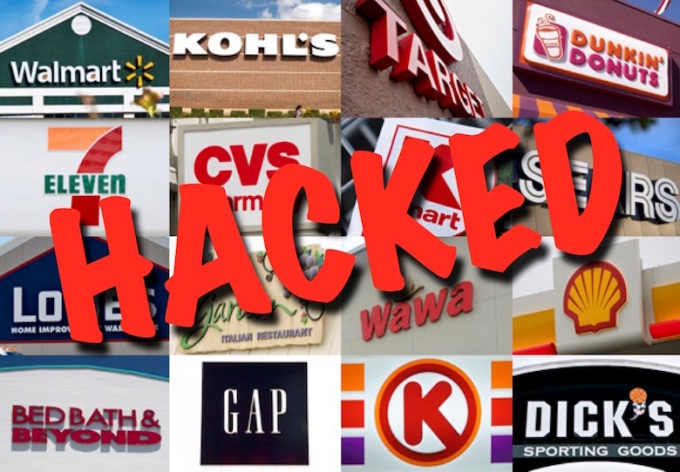 You can’t make this stuff up.

MCX, the retailer consortium behind Apple Pay competitor CurrentC, has already been hacked, according to an email sent out to those people who have signed up for, or downloaded, the CurrentC app…

A spokeswoman confirmed that the email is real.

MCX, which is a consortium of dozens of retailers including Walmart, Best Buy, Target, Kohl’s and CVS, say that no other information has been taken but that the investigation is continuing. The “unauthorized third parties” were able to access email addresses of people who were part of the app’s private beta testing program as well as email addresses of people who simply signed up to access the app when it launches publicly…

MCX confirmed this morning that its member companies have promised to only support CurrentC. MCX was formed in large part to create a mobile app that would persuade shoppers to pay through their phone with their checking account or store-branded plastic. The retailers’ goal here was to cut down on the transaction fees it has to pay banks and credit card networks on traditional credit card purchases. That is likely a big reason why it opposes Apple Pay, which supports those traditional cards.

But the hack now raises big questions about whether shoppers will trust CurrentC app with their sensitive financial information when it launches; the app asks for users’ social security number and driver’s license information if they want to link their bank account with the app. The app does not currently let users pay with their traditional credit card accounts, though an MCX blog post published this morning said it would eventually support credit cards, though it didn’t provide details on which kinds. Until CurrentC launches, customers shopping at MCX stores will be left with the choice of using cash or traditional magstripe cards which have proved to be easy to clone.

By banning Apple Pay, which is built into the new line of iPhones, merchants are choosing to ban a more secure payment method. Apple Pay customers can use a wide range of credit and debit card accounts to make purchases. Users have to authorize a transaction by pressing their finger against the phone’s fingerprint sensor. The phone then sends payment information to a store’s checkout equipment, though it comes in the form of a stand-in string of characters known as a token and does not include an actual credit or debit card number.

Our household has already switched over to ApplePay. More than anything, we love the anonymity and security. No one gets to see our credit card number. Not even our name.

States that aren’t expanding Medicaid are leaving a total of $423 billion in federal funds on the table over the next decade. 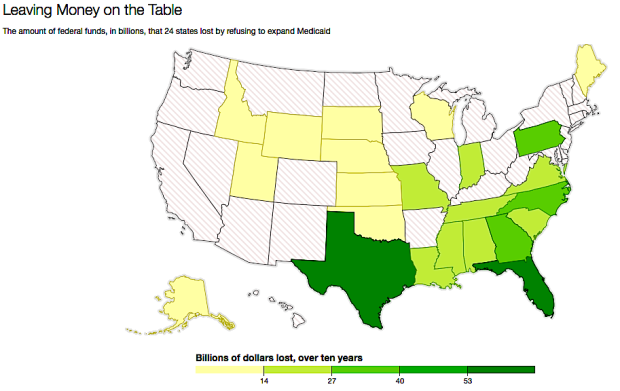 States do have to spend a bit of their own money to get the federal dollars. While the federal government covers the full cost of Medicaid expansion through 2016, states have to kick in a small portion (5 percent) beginning in 2017. The state’s contribution ultimately rises to 10 percent by 2020.

The Urban Institute, who crunched the numbers behind this map, finds that the states currently not expanding Medicaid would have to spend $31.6 billion over the next decade if they opt-in. That is definitely real money — but also less than a tenth of the amount they’re losing out on by passing up the expansion.

Almost all these states have Republican governors and Republican-conrolled legislatures. Proving once again idjits elect idjits – or liars.

The favorite food of Republicans

Four more U.S. states have placed orders with the USDA for the coming school year for ground beef that may contain ammonia-treated lean finely textured beef, or LFTB, a product that sparked a consumer backlash in in 2012.

School districts in Illinois, Pennsylvania, Virginia and Texas will soon be re-joining those in Iowa, Nebraska and South Dakota — the only three states to have continued buying up the meat item made by Beef Products, Inc. following the uproar — in serving the low cost product to schoolchildren…

As of Sept. 3, those seven states have ordered approximately 2 million pounds of ground beef that may contain LFTB, a fraction of the amount that schools nationwide once ordered.

In 2012, BPI sold 7 million pounds of LFTB to the National School Lunch Program and so-called pink slime was found in roughly 70% of all supermarket ground beef.

After being dropped by McDonald’s, several other fast food chains and supermarkets cited consumer concerns and followed suit, and the USDA amended its policy to allow school districts to opt out of purchasing ground beef that contains LFTB.

Consisting of meat by-products that have been run through a centrifuge and treated with ammonia to kill deadly pathogens like salmonella and E. coli, LFTB is then mixed into traditional ground beef as a way to extend cattle yields. BPI patented the ammonia treatment process, but other companies make LFTB using citric acid.

Bettina Siegel, the Houston mother and food blogger whose petition to rid school lunches of LFTB helped the issue go viral, says the decision to reintroduce the product boils down to money.

“I felt disappointed but not terribly surprised,” Siegel told the Daily News. “Schools initially purchased ground beef with LFTB to cut costs — reportedly, a few pennies per pound. So once the media spotlight on LFTB was removed, I suppose it was predictable that some districts would choose to resume serving it to their students…”

Not so incidentally, BPI filed a $1.2 billion defamation lawsuit against ABC News, two former USDA microbiologists, one of whom coined the term “pink slime”…and its own former corporate quality assurance manager.

A predictable reponse from creeps who don’t want the public to recognize their products as creepy.

Customers of Ulster Bank could end up going without a fully functioning bank account for an entire month…More than a fortnight after a technical problem sent the bank’s computers into disarray, many customers are still experiencing difficulties accessing accounts and processing payments, with some reporting that vast sums of money have disappeared in the system…

The chief executive of Ulster Bank, Jim Brown, apologised to customers, who he said had every right to be frustrated, adding: “Our efforts to fix this are paying off, and over the last few days we have been able to gain a much clearer picture about when we expect all systems to be largely back to normal. WTF?

“We expect gradual and significant improvements for our customers and each day we will see more transactions processing, fewer problems with our systems, and less inconvenience for our customers.” Brown thanked other banks who had worked with his own to help process payments.

Accounts are supposed to be up and running again as normal at NatWest and RBS, but customers have been told to check their balances after it emerged that some had personal loan repayments debited twice.

Also, on NatWest’s website several customers are reporting that cheques paid into accounts on 25 June have still not cleared.

This is more than the usual geek rationale: garbage in = garbage out.

Creative excuses are starting to spin inside banking circles. They all devolve to incompetent decisions made – governed by beancounters overruling everyone.

C’mon, Mitch – put up or shut up!
Daylife/Getty Images used by permission

Warren Buffett is willing to put his money where his mouth is, if only congressional Republicans would join him.

The billionaire investor, in the new issue of Time magazine, says he will donate $1 to paying down the national debt for every dollar donated by a Republican in Congress. The only exception is Senate Republican leader Mitch McConnell – for whom Buffett said he would go $3-to-$1.

The idea stems from a New York Times opinion piece Buffett wrote last August in which he said the rich ought to pay more taxes. It sparked an instant controversy, with some Washington conservatives calling on the 81-year-old “Oracle of Omaha” to voluntarily pay extra…

He went on to tell the magazine that what the country needed was a system that favored people who were not born investors.

“We need a tax system that takes very good care of people who just really aren’t as well adapted to the market system, and to capitalism, but are nevertheless just as good citizens, and are doing things that are of use in society,” he said.

Republicans will do anything to help their cause – except help the country.