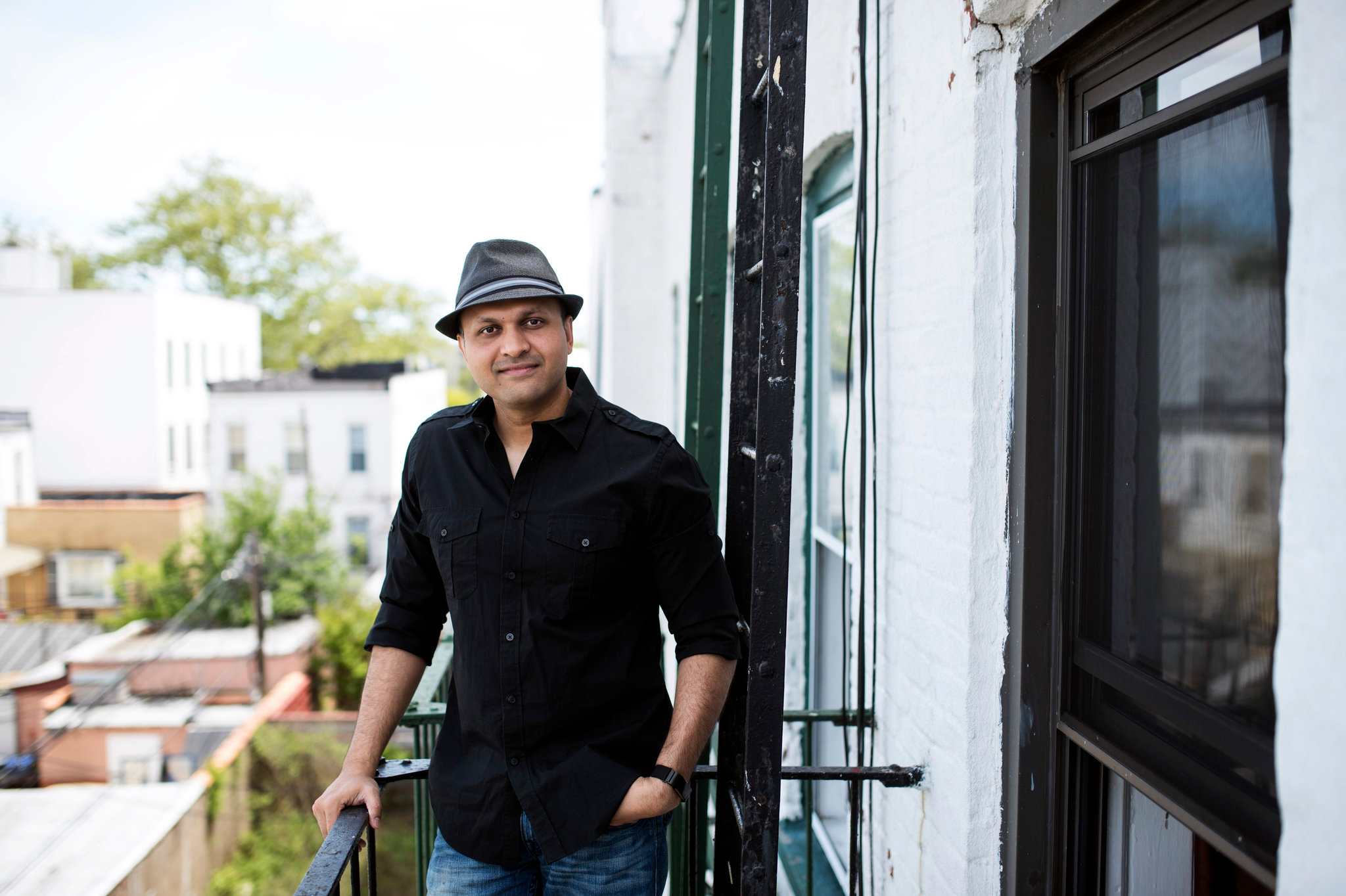 ❝ Syed Ali is an American citizen, an officer in the New York Police Department, a combat veteran and a major in the United States Army Reserve. But none of that made a difference at passport control last month when he arrived at Kennedy Airport on an evening flight from Istanbul.

❝ After landing, Officer Ali was led from passport control to a holding area for what Customs and Border Protection refers to as secondary screening. But instead of a quick check to confirm his identity, Officer Ali said, he was held for hours, past midnight. When he asked, after more than an hour of waiting, whether it would take much longer, an officer threatened to incarcerate him…

❝ Officer Ali’s trip was part of a vacation to decompress after a two-year military deployment to Kuwait, where he had served in Operation Inherent Resolve, the mission to combat the Islamic State. In September, he is scheduled to return to his regular job with the Police Department, where he most recently worked in the transit unit.

Officer Ali is one of a number of Muslim Americans who have complained that since the start of the Trump administration they have been subjected to additional scrutiny when returning from abroad, facing hours in airport custody and what they described as hostile questioning…

❝ Officer Ali said his feeling of powerlessness in airport custody “was one of the lowest points in my life.”

“I’ve dedicated my life to public service,” he said. “I want my country to treat me fairly, too.”

Yup, tell me about “post-racial” America, the Land of the Free and the Home of the Brave. We have a government run by sniveling chickenhawks like Trump, racist weasels like Jeff Sessions. It ain’t new. It ain’t getting old in a country where elections are managed by money and an electoral college that has little to do with democracy.

I’ve confronted crap like this my whole life and I’m native-born and white. The ignorant bigots I rejected in the 1950’s are back as strong as ever. Republicans roll over and stick their hind feet in the air out of something they call Party Loyalty – and ignore any loyalty to the Constitution of the United States and all the bits and pieces added trying keep our legal system within a couple decades of modern society.

Officer Ali faced the scumbag ideology that’s always been part of this country. The scum just has a better chance to surface when idjits elect a scumsucker to live in the White House.

A Northern California police officer has been placed on leave after a video surfaced showing him pulling a gun on a man who was recording him on his cellphone.

Don McComas said he was in front of his home and hooking his boat to a trailer when he saw the officer drive into his neighborhood. The officer, he said, made a few turns and stopped to face McComas. The officer did nothing but point at McComas and his home, McComas said.

McComas became concerned, so he pulled out his cellphone camera and started filming.

The video shows the officer stopping his police SUV and appearing to film McComas with a camera or cellphone.

On the video, McComas moves in closer to record the license plate number on the officer’s vehicle. The officer gets out of the SUV and tells McComas to take his hand out of his pocket.

McComas replies: “No sir, I’ve done nothing. I have done absolutely nothing. No.”…

The video shows McComas backing away as the officer moves the gun toward him.

McComas repeats he did nothing wrong and tells the officer not to touch him.

“Why are you doing this?” the officer asks McComas, who responds, “Why are you sitting here with your gun on me? This is why I am doing this. To protect myself from you….”

As the officer walks away, he tells McComas, “Go ahead, have a nice day and put it on YouTube. I don’t really care.”

Another good reason why you need to have some kind of device with you to record interaction with officialdom of just about any kind IMHO. Cops are the most dangerous, of course, They’re usually carrying a gun – if you’re in the GOUSA.

The uncut quality of the video speaks for itself. This wasn’t a civilian trying to produce the sort of gotcha film beloved of Tea Party agitprop. Just a guy in his neighborhood wondering why a cop wanders up to the front of his driveway and stops.

I would recommend a little more discretion. Putting your cellphone in a shirt pocket might be less likely to set off a creep who already thinks he’s superior to all other mortals.

“Are you a constitutionalist or crazy guy or something like that” pretty much sums it up. That’s what too many coppers think of civilians and our rights.

Detective David Currie, 50, and his now-husband Aaron Woodard, 33, tied the knot shortly after midnight on Tuesday, the 7th, when the state legalized gay marriage.

And after requesting permission from his superiors, Currie walked down the registry aisle with full support of the Broward County Sheriff’s to wed in uniform.

All the conservative True Believers in Florida must have their shorts in a truly world-class bunch over this. Meanwhile, a couple of people who love each other get to live a legally married life together.

A New York City judge dropped a prostitution case against a young woman, saying she was clearly not wearing the outfit of a prostitute.

Felicia McGinnis, 26, was arrested in the early hours of Jan. 9 after police saw her talking to a passersby on a sidewalk in Manhattan’s Midtown area, and charged with loitering for the purpose of prostitution…

…Judge Felicia Mennin wrote that McGinnis’ outfit did not warrant a prostitution charge and tossed the case out.

“Any current issue of a fashion magazine would display plenty of women similarly dressed,” Mennin wrote. “However, the choice of such outfit hardly demonstrates the wearer’s proclivity to engage in prostitution.”

Mennin also slammed the police officer for noting that McGinnis’ pants were “revealing” because they “outlined” her legs.

“[The] characterization of the jeans as ‘revealing’ because they ‘outlined the defendant’s legs’ seems more to be expected in the dress code of a 1950s high school than a criminal-court pleading,” Mennin wrote.

“Granted, this incident occurred in the middle of winter,” Mennin added. “However, a pea coat is still standard issue to members of the US Navy … and blue jeans, skin-tight or baggy, are practically an American icon.”

The copper who promoted this bust deserves to spend the rest of his career stuck somewhere in a Tea Party time warp – rounding up Beatles records and copies of Catcher in the Rye for burning, arresting people for shopping on a Sunday and, of course, shutting down pharmacies that sell condoms.

The police chief of a small South Carolina town will ask a jury to decide if a woman broke the state’s obscenity laws by driving a pickup truck with plastic testicles hanging from the back.

South Carolina law considers a bumper sticker, decal or device indecent when it describes, in an offensive way as determined by contemporary community standards, “sexual acts, excretory functions, or parts of the human body…”

The Charleston law firm Savage & Savage will represent Tice for free, attorney Scott Bischoff said. The trial had been scheduled for next week but was delayed because the defendant will be out of town.

“She’s such a sweet lady and she just says ‘I don’t want to pay the fine.’ We’ll let a jury decide whether this is really criminal behavior. I don’t want to take away from the importance of free speech, but it’s really comical,” he said…

Fuda said if the fake testicles were a free speech issue, “I don’t know what they would be trying to express.”

I think what they’re trying to say is that a certain segment of the American population has the sense of humor of a horse’s ass.

The fact remains it isn’t up to the local commissar in blue to decide what your free speech is saying or laughing about. You have the right to decide, think and speak – or laugh!

An off-duty Chicago police officer dressed up as a clown for a South Side fundraiser shot and killed a teen who held him at gunpoint tonight after the event, authorities said.

The officer…was in his clown outfit for a fundraiser for a day-care business. The event, attended by a group of 50 children, was near West 87th Street and South Damen Avenue.

During a struggle with the teen, the officer grabbed hold of the gun, opened fire and killed him.

The officer sustained minor injuries, according to a release from police News Affairs.

Don’t carry a gun unless you’re prepared to use it. Don’t pull a gun on someone unless you’re capable of using it. Don’t get close enough to let someone take your gun away – and use it on you.

In this case – I’d say instant justice was meted out.

A plainclothes police detective allegedly pulled his gun out and waved it at a large group of people in a snowball fight at the corner of 14th and U Streets NW Saturday afternoon.

An off-duty member of the Metropolitan Police Dept. was reportedly driving his car in the area when the car was suddenly pelted with a barrage of snowballs, according to a statement from the MPD.

The detective stopped his car, got out and approached a crowd of people that might have thrown the snowballs. He then got into a verbal fight with members of the crowd, according to police.

MPD claims the footage does not show the detective drawing his weapon, but they have since received additional images and statements that would seem to support that allegation.

According to 3D Commander George Kusik, the uniformed officer conducted himself appropriately.

Uh, OK. There wasn’t anything more demanding of his attention? Like going home, having supper, leaving people alone?

The police officer who ended the Fort Hood massacre by shooting the suspect is known as the enforcer on her street, a “tough woman” who patrolled her neighborhood and once stopped burglars at her house.

“If you come in, I’m going to shoot,” Kimberly Munley told the would-be intruders last year.

It was Munley who arrived quickly Thursday at the scene of the worst massacre at an Army base in U.S. history, where 13 people were killed. She confronted the alleged gunman, Maj. Nidal Malik Hasan, and shot him four times. Munley was wounded in the exchange.

Munley, the mother of a 3-year-old girl, lives on a street where a lot of homes are vacant because so many residents are deployed at war in Iraq and Afghanistan…

“We sleep a lot safer knowing she’s on the block,” said Sgt. William Barbrow, another neighbor…

Her bio on Twitter makes the point: “I live a good life….a hard one, but I go to sleep peacefully @ night knowing that I may have made a difference in someone’s life.”

You surely made a difference, this time.

From Reuters’ series of photos of Obama’s Euro trip. This says a lot about class, race and life in the UK.