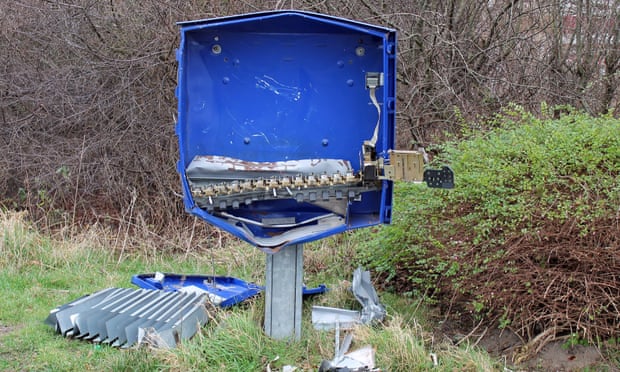 The man appeared to have climbed into the chimney on Friday night while the owner was away and then became stuck, according to the Fresno county sheriff’s office.

❝The owner of the home in Huron, a small town in Fresno county, lit a fire in his fireplace on Saturday afternoon but then heard a man yelling inside the chimney as the house filled with smoke…

The homeowner tried to extinguish the flames but firefighters who dismantled the chimney with drills and chisels during a rescue effort found the suspect dead inside, the sheriff’s office said.

The deceased man was identified by the coroner’s office as Cody Caldwell, aged 19. The cause of death was determined to be smoke inhalation and burns.

Should’ve checked the weather forecast before he set off chimney-burgling. 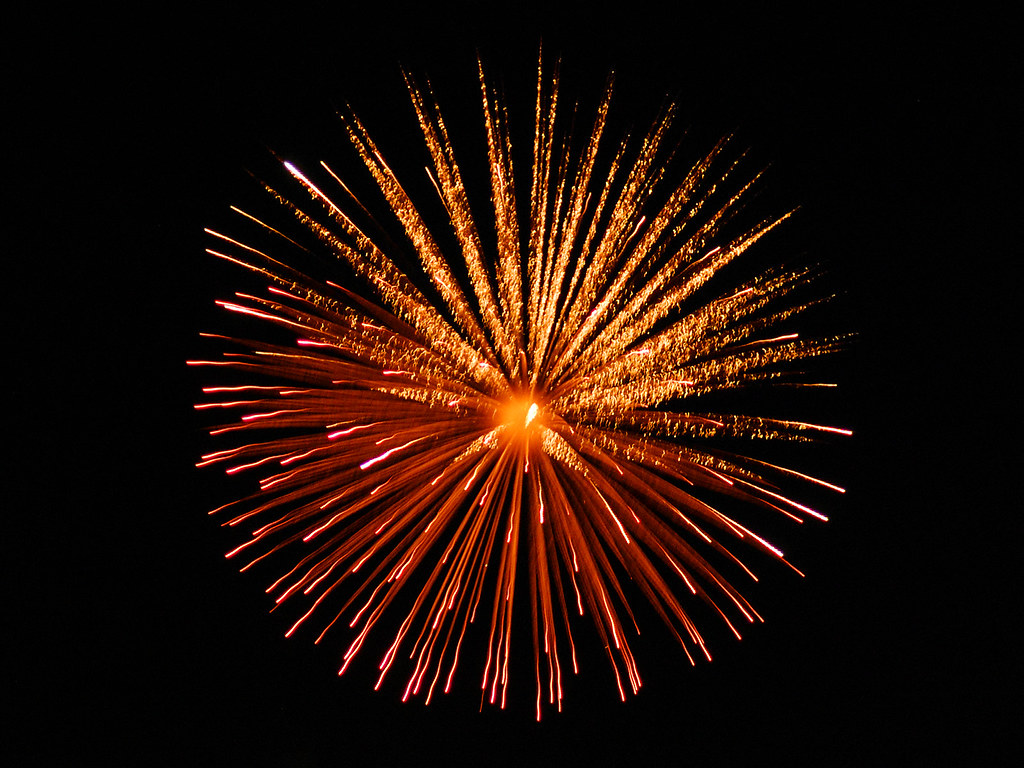 “She was having trouble adjusting her bra holster, couldn’t get it to fit the way she wanted it to. She was looking down at it and accidentally discharged the weapon,” St Joseph public safety director Mark Clapp told the Gazette about the woman, Christina Bond.

Bond reportedly shot herself in the eye on New Year’s Day, and had to be airlifted to Bronson Methodist Hospital. Her full autopsy hasn’t been released.

Gun accessories such as bra and purse holsters, designed for women, have grown in popularity over the last few years. Many businesses now cater specifically to female gun owners.

Did you think the combination of paranoia and stupidity was exclusive to men?

Bond was a delegate for St Joseph Township, in south-west Michigan. Bond was also a bodybuilder, winning the Miss Michigan Figure Overall Championship in 2013, and volunteered at the ministry at Berrien County jail.

An Amtrak train struck a Jeep in Poplar Bluff, Mo., killing two teens and injuring one who were playing a game involving a ghost story…

Just after midnight Monday, five teens parked on train tracks that cut across County Road 554 and shut off the car in search of ghosts.

“They were playing a stupid game called ‘Ghost Train,’ and the object is to get scared, kind of like telling stories on Halloween,” Butler County Coroner Jim Akers said. “The game was to park on the tracks, let the windows fog up inside and let your mind play tricks on you.”

The St. Louis Post-Dispatch reported when a passenger train came around the bend, the driver couldn’t start the car again. Three teens fled to safety, but two, in a panic, were unable to unbuckle themselves. One girl ran back to help them, just as the train smashed into the car.

Victoria Swanson, 15, and Haley Whitmer, 17, died at the scene. Kaitlyn Fowler, 15, was seriously injured and hospitalized.

The game, outlined in a 2007 post on strangeusa.com, is rooted in the story of a train wreck which occurred in the 1900s, killing nearly everyone on board. Once one parks on the tracks and shuts their car off, the windows will fog up and supposedly train whistles can be heard.

Well, I imagine they heard the real train whistle. Too late.

Thomas sitting in the cab before he fell to his death

A nearly 15-hour standoff ended early Tuesday in Dallas when a robbery suspect who climbed atop a construction crane on the campus of Southern Methodist University fell 150 feet to his death.

Lee Dell Thomas Jr., 44, had barricaded himself in the crane’s cab Monday. He fell after Dallas police sent four officers up the crane to try to remove him…

Thomas had one leg inside and one leg outside the window of the compartment. Then, he clung to the crane’s edge for a moment before falling to his death just before 2 a.m. Tuesday.

Thomas may have been involved in a robbery in Dallas, police said…

Thomas was spotted in the crane’s control cab around 11:30 a.m. Monday, apparently trying to avoid arrest, local affiliates reported. Shortly afterward, he threw an unidentified object from the cab.

The crane was being used to build a housing area near the football stadium, according to CNN affiliate KTVT. The crane is also next to the George W. Bush Presidential Library, which is under construction.

Video from KTVT showed the silhouette of a man holed up in the cab of the crane, refusing to come down.

Local affiliates at the scene said Thomas got sick inside the cab Monday, possibly because the compartment didn’t have air-conditioning. Members of the media saw him take off his shirt and shoes, break out a window and toss his clothing out.

Another one bites the dust – pretty much literally. How do you hide from the law in a dead end 150 feet in the air?

Two people in the bus and a woman who was nearby were injured in the explosion, he added.

“We suspect they were armed robbers going (on) an operation, and things went wrong for them,” said Indabawa.

Port Harcourt is at the heart of Nigeria’s 2 million plus barrel a day oil industry and has been plagued by militant groups and criminal gangs cashing in on the money it generates.

A large economy-size oops! Qualifying for a Darwin Award, as well.

Just before he stepped off the edge

Tiago Klimeck, 27, was one of the actors from a local theater company taking part in an independent production of the play April 6 in the city of Itarare. Klimeck died Sunday after spending more than two weeks in a medically induced coma due to extensive brain injuries from a prolonged lack of oxygen after accidentally hanging himself, according to the Hospital Santa Casa de Misericordia, in the neighboring city of Itapeva.

…Klimeck, in the role of Judas Iscariot, hangs himself as described in the Bible in the book of Matthew. Klimeck wore a harness under his robe during the play, according to CNN affiliate TV Record.

Police investigator Jose Victor Bassetti told the news station this was the third year the local fire department let the theater company borrow the harness for the play and that Klimeck was not supervised because he knew how to use the equipment. The harness, along with the rope used in the play, are now being analyzed at the Criminal Institute of Sorocaba.

Uh, obviously, he wasn’t as competent at using the safety harness as he thought, eh?

A Sri Lankan man has died while trying to set a record for the longest time spent buried alive, police say.

Janaka Basnayake, 24, is said to have buried himself over the weekend with the help of family and friends in a trench sealed with wood and soil in the town of Kantale, about 220km north of Sri Lanka’s capital, Colombo. A local newspaper reported that the trench was three metres deep.

Basnayake was buried at around 9.30am on Saturday. Police said that when he was brought to the surface at 4pm he was unconscious and was taken to a hospital, where he was pronounced dead on arrival…

Basnayake’s mother, LD Leelawathi, said her son had enjoyed performing unusual acts since his childhood – a liking that grew after watching movies, the Lankadeepa newspaper reported. It quoted her as saying her son had been buried alive on two previous occasions – for two and a half hours and six hours respectively.

It was unclear whether there is an official world record for the longest time buried alive.

Poor bugger just may have set a new record for the period of time he was alive. We’ll never know.

The Guiness World Records stopped recognizing any record in 1991 citing safety concerns over people killing themselves in the attempt..

An explosive south Fulton County fire was apparently started last month by a man trying to burn his ex-girlfriend’s body…Sarone Bridges perished in the ensuing blaze, but not immediately after the blast that started the quick-burning fire, Fulton County Fire Chief Larry Few said.

“Based on how his body was positioned, I think (the) explosion took its toll on him,” Few said. “The concussion from the blast could have made him disoriented where he fell, and he received the thermal burns afterwards.”

Few said Bridges, 35, doused a sleeping bag with gasoline and laid Bland’s body on the bag to set it on fire. But his plan literally blew up in his face.

“When he threw that match, the vapors of gasoline are what ignited,” Few said. “There was an immediate fireball that blew the windows out…”

Sometimes you get what you deserve.